To echo Erik from yesterday, “There’s never good news when we are talking Texas politics.”

Texas governor Gregg Abbott has published an alarmist opinion piece about redistricting, which, as we all know, is a desperate and diabolical power-grab by the Democrats. I’ll leave it to y’all to get into the nuts and bolts of Abbott’s argument–because what really got to me was the dog-whistle headline:

Since I happen to spend a fair bit of time in Budapest, this invocation of Soros as a political enemy is rather unsettling. A few months back, I laid out my concerns about Lex CEU (a Hungarian law passed as an attempt to shutter Central European University, which was founded by Soros). Since then, the Hungarian Parliament has also passed a law requiring NGOs that receive non-Hungarian funding to register as “foreign-supported organizations” and include that designation on all public materials and communications (a policy strongly opposed by Amnesty International and the Hungarian Helsinki Committee, among others).

And, just in case, Prime Minister Viktor Orban and his Fidesz party supporters had left any doubt about their real target, they launched this massive poster campaign last month, warning Hungarians not to “let Soros have the last laugh.” 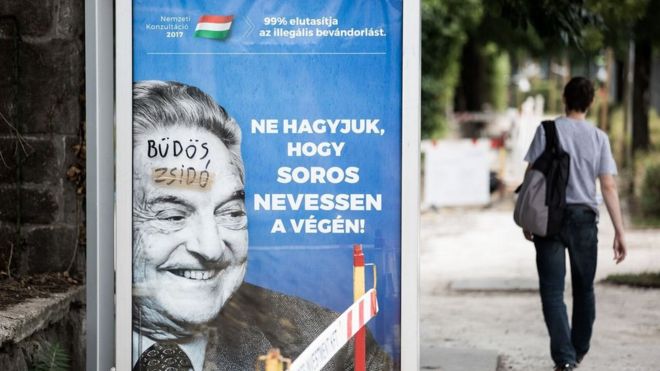 Those for whom the consistent linking of Soros (a Hungarian Jew), “cosmopolitanism,” wealth, and secret power manipulation was too subtle in its anti-Semitism took to defacing the posters with racial slurs (“dirty Jew” is scrawled across Soros’s forehead in the example above). Conveniently, the posters all disappeared by the time Israeli Prime Minister Benjamin Netanyahu arrived for his state visit (plus, Orban apologized for Hungary’s WWII Nazi collaboration and promised to be nice to Jews in Hungary from now on).

So, how does Abbott’s anti-Soros-ism stack up? A few highlights:

The Soros network has their sights set on re-drawing congressional districts in the Lone Star State to push their progressive agenda and turn the Texas dream into a California nightmare.

Invoking a shady network run by Soros and an outside power (California, gasp!) easily echoes the recent Hungarian policies.

The GOP needs to take the Soros network and the Holder, Obama, and Pelosi alliance seriously.

Complacency at the state and local level in 2018 will threaten the integrity of our elections and the future of our nation for generations to come.

…doubles down on the implication that not only elections (our political process and institutions), but generations (bloodlines?) are endangered by Soros and his shadowy network.

Abbott is taking a page straight from Orban’s playbook–and embracing ethno-nationalist rhetoric deep in the heart of Texas.

For years, checking in on Hungarian politics was the one sure way I had to feel better about our own. More and more, it strikes too close to home.