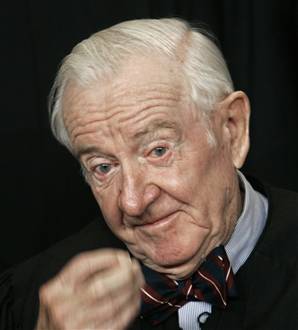 No huge surprise here, but John Paul Stevens will be resigning this summer. [UPDATE: more from Liptak.]  I hope Obama will consider that since 1916 this seat on the Court has been held by three-just-three giants: Louis Brandeis, William O. Douglas, and Stevens. (And, personally, I’d prefer a throwback to someone like Douglas, as it says something that a moderate Republican has become the leader of the Court’s liberal wing.) I’ll have more about possible replacements as well as some of JPS’s greatest hits over the coming weeks. Let’s start with his short, classic concurrence in Carhart I:

Although much ink is spilled today describing the gruesome nature of late-term abortion procedures, that rhetoric does not provide me a reason to believe that the procedure Nebraska here claims it seeks to ban is more brutal, more gruesome, or less respectful of “potential life” than the equally gruesome procedure Nebraska claims it still allows. Justice Ginsburg and Judge Posner have, I believe, correctly diagnosed the underlying reason for the enactment of this legislation–a reason that also explains much of the Court’s rhetoric directed at an objective that extends well beyond the narrow issue that this case presents. The rhetoric is almost, but not quite, loud enough to obscure the quiet fact that during the past 27 years, the central holding of Roe v. Wade, 410 U.S. 113 (1973), has been endorsed by all but 4 of the 17 Justices who have addressed the issue. That holding–that the word “liberty” in the Fourteenth Amendment includes a woman’s right to make this difficult and extremely personal decision–makes it impossible for me to understand how a State has any legitimate interest in requiring a doctor to follow any procedure other than the one that he or she reasonably believes will best protect the woman in her exercise of this constitutional liberty. But one need not even approach this view today to conclude that Nebraska’s law must fall. For the notion that either of these two equally gruesome procedures performed at this late stage of gestation is more akin to infanticide than the other, or that the State furthers any legitimate interest by banning one but not the other, is simply irrational. See U.S. Const., Amdt. 14.