This is the grave of Horatio Seymour. 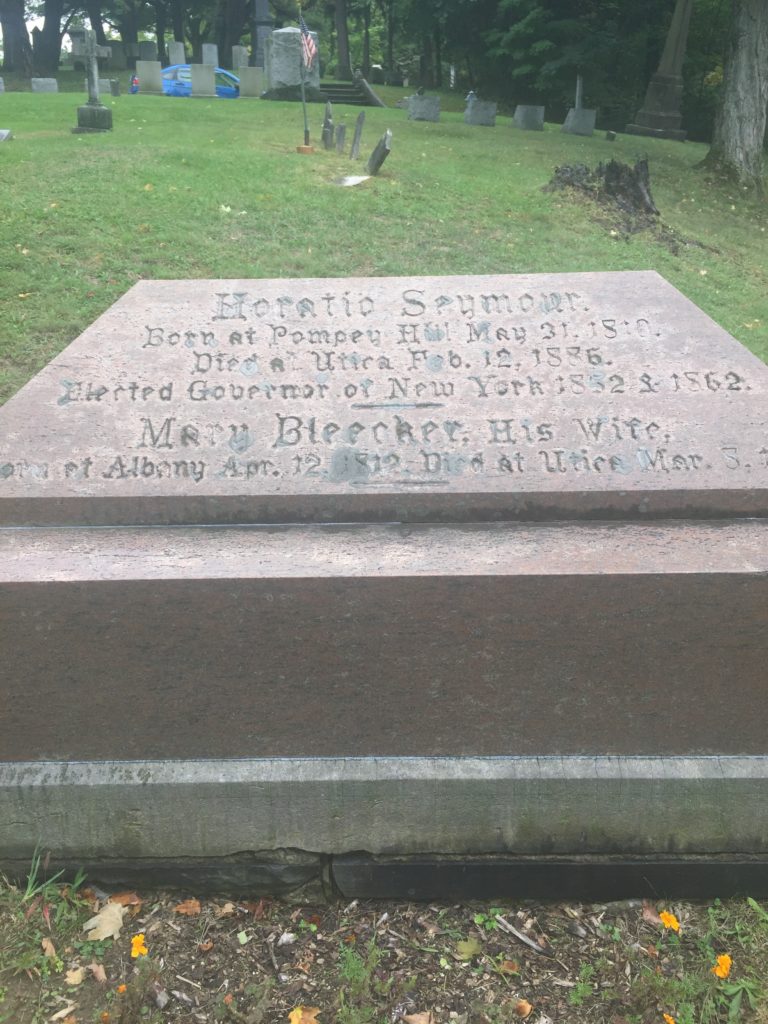 This terrible person was born in Pompey Hill, New York in 1810. He became a lawyer in 1832 after attending several colleges. But he never practiced, instead managing the family businesses and entering into politics. He became a protege of William Marcy, noted northern servant of the slave power, in 1833. Seymour would follow Marcy’s path to a successful and ignoble career. He entered the New York State Assembly in 1841 and at the same time was mayor of Utica for two years. He became New York Speaker in 1845. Seymour ran for governor in 1850 but lost a narrow election to Whig Wellington Hunt. But he won in 1852 on the coattails of another Democrat with terrible politics, Franklin Pierce, who Seymour strongly supported after Marcy didn’t get the nomination. Being governor of New York, far and away the largest state in the nation, instantly made one a presidential possible. But with the Democratic Party riven with internal divisions that were still more about patronage than slavery, which everyone basically supported even if they disagreed on issues such as Kansas-Nebraska, Seymour struggled to govern effectively. In 1854, he lost a very narrow race for governor that featured multiple third parties. Yet most Democrats liked Seymour well enough and he was frequently discussed as a compromise candidate between the various factions for the presidency, with his name seriously bandied about in both 1856 and 1860.

Up to this point, Seymour was a fairly standard doughface, or northern man with southern principles. He never really had the power or authority to put his bad racial politics into action with much effect. But with the initial dissatisfaction with Lincoln’s prosecution of the Civil War, Seymour ran for another term as governor in 1862 and won. Here he became perhaps the leading critic of Lincoln’s administration and of course opposed any action that would free the slaves. Seymour especially ripped the draft. In fact, he and other leading New York Democrats, such as Fernando Wood, played a critical role in fomenting the New York Draft Riots in 1863, which had to be put down by troops marching from Gettysburg, where they had just won the war’s important battle. Seymour believed the Lincoln administration was targeting Democratic areas with high draft targets and he determined to resist this. But Seymour of course opposed a draft at all or any federal attempt to force people to serve in the military. The rioters shouted out the names of both Seymour and Jefferson Davis as they rampaged through the streets of New York, lynching blacks and attacking prominent Republicans. When speaking to the crowds to try and settle the rioters down, he was openly conciliatory to them rather than seeing the need to crush this rebellion. He discussed the injustice of the Lincoln administration, the Emancipation Proclamation, and the draft, telling the rioters he understood their position. Maybe he did sympathize with their position but that’s not to his credit. Moreover, when discussing the Emancipation Proclamation upon its issuance, Seymour called it, “a proposal for the butchery of women and children, for scenes of lust and rapine, and of arson and murder.” Classy.

Seymour also vetoed a bill giving soldiers the vote, claiming it was because they were not legal residents of their home states, but of course this was grounded in the knowledge they would vote for Republicans, a move not so different from states today trying to deny out of state college students the vote in the states where they attend school because of the belief they would vote for Democrats. Republicans openly accused Seymour of treason. This was probably somewhat overstated, as like George McClellan, Seymour did believe by this time the Confederate rebellion needed to be defeated, but of course without touching southern “property.” He also had a very bad track record on this, having stated in 1860 that, “If it be true that slavery must be abolished to save the Union, then the people of the South should be allowed to withdraw themselves from the government which cannot give them the protection guaranteed by its terms.” He lost the 1864 election in the aftermath of these actions and words.

After the Civil War, Seymour became the North’s biggest supporter of Andrew Johnson’s Reconstruction policies, which in case you need a refresher, were to establish the freed slaves in a position as close to slavery as possible and allow the ex-Confederate leaders to reenter Congress. Seymour did not initially plan to be the 1868 Democratic nominee for president but with a deadlocked convention, as was common in the 19th century, he became the compromise candidate. The 1868 Democratic ticket was arguably the most overtly white supremacist candidacy since the Civil War, even compared to that of Donald Trump. The Democratic Party called Grant the “N—– candidate” and Seymour the “White Man’s Candidate.” Seymour himself mostly talked about economics. But his VP candidate, Frank Blair, Jr., did all the talking about racism, white supremacy, and the fears of black men raping white women than any Democrat could want. Seymour certainly didn’t disagree. When he did talk about race, he said things such as that the Republicans “Negro military policy” was the “cause of all the nation’s financial troubles” and worried that black male supremacy would cause “the government of the South to go into the hands of the Negroes.” Grant whipped him in the electoral college of course. But in the popular vote, Seymour took 47 percent of the vote, even with black men voting in most southern states and Virginia, Texas, and Mississippi not having any electoral votes. The commitment of American whites to white supremacy was never far from the surface, even when Ulysses S. Grant was the presidential candidate. Just in case the overt racism of this campaign isn’t clear enough, let me provide you a visual. 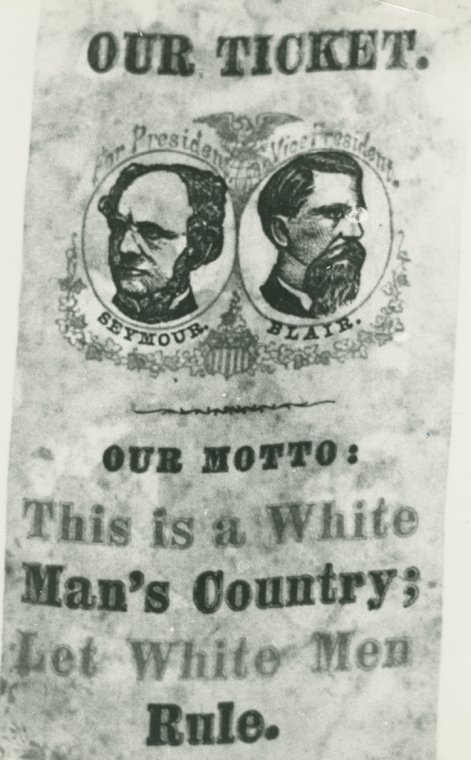 Seymour moved into senior status in the Democratic Party after his defeat, turning down opportunities to run for office. His health began to decline by 1876 and he died in 1886.