As I noted in the comments to this post, it was only a matter of time before I started Mad Men; however, as I’ve studiously avoided reading about the show for the better part of two years now, I’m not sure my insights into it will be all that insightful. Still, I’ll soldier on, with the caveat that I’m about to watch the eighth episode of the most recent season and would rather not have it spoiled. Not, mind you, that I think it could be, as the one of the defining features of the show is the thundering predictability of its characters. That’s not as an indictment of Matt Weiner or his writing staff, merely an acknowledgment of the show’s central conceit: these are people who want to be left behind when the rest of the world is raptured by history—at least at first.

Don Draper and his fellows at Sterling-Cooper aggressively court their own obsolescence by cultivating an aesthetic that appeals to inhabitants of a disappearing culture. In this respect, focusing the show around the Gatsby in the gray flannel suit is an inspired decision: Draper is a man at a remove both from his own history and those of archetypes that shape his character, and as such is constitutionally belated. He does not believe in free love, like his beatnik paramour Midge Daniels, he merely lacks a convincing moral objection to committing serial adultery. His persona is a fashioned response to a vanishing culture, and it appeals—both for the clients of Sterling-Cooper and viewers of the show—to the perpetually recycled nostalgia for a time in which romantic figures of powerful genius were recognized and compensated accordingly. In the decades previous, as evidenced by an article Earnest Havemann wrote for Life in 1958, it had actually been true that

most advertising agencies were started on the strength of one man’s genius and personality. These old giants of the business had an intuitive feel for advertising. Flying strictly by the seat of their pants, they made brilliant guesses as to what would put the public in the mood to buy and planned brilliant campaigns around their hunches. Yesterday’s ad man used to take a look at the product, then go off in a corner to dream up his campaign. Today’s ad man sends for the research on what consumers are thinking about at the moment and often goes out to size up the consumer himself.

Havemann captures, in miniature, why Peter Campbell’s career will inevitably eclipse Draper’s: a person can only have hunches about cultures they know intimately, so the value of a Don Draper is inversely proportional to, for example, market penetration into urban black communities. This is not to say that Campbell’s attempt to identify the desires of black Americans at the beginning of the Civil Rights Movement makes him any more sympathetic as a character, or to viewers, as his commitment to equality is as instrumental as Draper’s is to free love.

Campbell is, in a sense, becoming us, and we revile his behavior to the extent that we recognize our sins in his actions. Draper, however, is becoming art, and as such we hold him as responsible for his actions as we would Emma Bovary. His self-fashioning was not merely based on literary precedent, it was an act of literature, if you will, and much of the appeal of the show is based on watching an inscrutable literary character interact with actual humans. Not literally, of course, but as the show moves forward in time, the endgames of everyone except for Draper become increasingly recognizable to the audience as modern types. We know why the black elevator attendent is reluctant to talk to the white advertising accountant. We know why the career woman is undermining gender expectations by sleeping around. These characters are commendable or revolting according to a familiar cultural logic tempered by a little historical knowledge. We may not know precisely how the story of Peggy Olson ends, for example, but we know what will limit her ability to grow and how struggling against the stunt will deform her, because hers is the thundering predictability of unwed mothers and unfair office politics.

So Peter and Peggy are not left behind because, over the course of two seasons, they learn to love and accept modernity in their hearts. They still seek Draper’s approval, but they recognize that he’s valuable in a way the world soon stop valuing. When the rapture comes, they know Draper won’t be numbered among the chosen. They may not know why—Draper himself seems ignorant—but they know. The key item, in this regard, is the note left by the hitchhikers who dose and rob Draper: 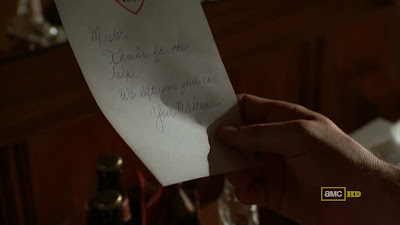 In an act of petty kindness, almost pity, they leave him behind with the means to join them because they know he lacks the will to do so. They may not have personally witnessed his days of the locust in the second season, but like Peter and Peggy, they understand that he will not be following them into the future. Nor, for that matter, will Joan Holloway, whose related status I’ll address in a future post should you so desire.

(So long as I’m feeling semi-literary, I should add: if you want to learn why The Dark Knight is actually all about dogs, that’s my beat too.)