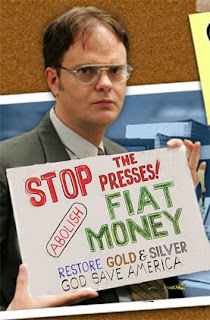 “A Tea Party Manifesto” reads better if you imagine it being delivered in the voice of Dwight Schrute.

1. A moratorium on bailouts, whether for Wall Street bankers, General Motors, or the irresponsible guy down the street who “bought” too much house. “Failures must be allowed to fail.”

2. Repeal of all “Stimulus” spending for the years 2011 and beyond.

4. Defeat of the Obama 2010 budget, with a new budget set at 2008 levels plus inflation. We’ve already spent too much money that we don’t have.

5. Defeat of any politician who voted for the February “Stimulus” bill.

6. Complete selloff and shutdown of Fannie Mae and Freddie Mac, and an immediate ban on campaign contributions from both, as well as any other firm in Federal receivership.

The best part is when the poor fellow insists that each of these is a “clear, achievable goal.”