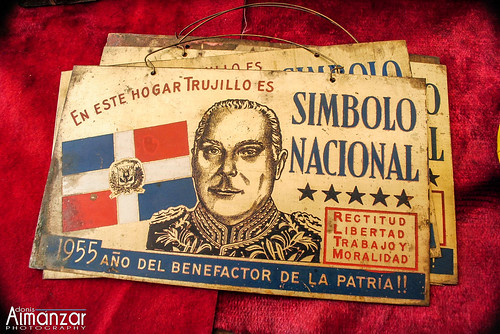 Paul Krugman points out some similarities between Donald Trump and various despots from Central Asian spinoffs of the Soviet system.   His points are all valid, but the column is an indirect reminder to me of a question I’ve been mulling over for awhile now: why has so comparatively little attention been given to the remarkable extent to which the Trump phenomenon appears to represent the development of a Norteamericano version of a classic Latin American caudillo?

It’s not as if this has escaped notice altogether:  This Foreign Affairs article from May does a nice job of locating Trump within a historical arc that features such figures as Antonio Lopez de Santa Anna,  Rafael Trujillo, Juan Peron, and, more recently, Carlos Menem, Alberto Fujimori, Hugo Chavez, and Rafael Correa, among many others.  Mexico’s greatest living essayist, Enrique Krauze, published this cautionary piece in Slate a few weeks before the election.

Nevertheless for every article pointing out the many ways in which Trump and Trumpism signal the emergence of a northern version of the classic caudillo, there must be dozens of pieces invoking various transatlantic figures and their associated political movements, from Mussolini and Berlusconi in Italy, to Putin and other post-Soviet figures, to You Know Who himself.

This, I think, is a reflection of the lamentable extent to which both elite and mainstream political discourse in the United States continues to basically ignore Latin America, even in situations in which the salience of Latin American history to the contemporary North American situation should be overwhelmingly obvious.

The classic Caudillo is a charismatic populist, who attacks the existing political and economic establishment with what might be called trans-ideological enthusiasm.  He claims that he and he alone has the ability to solve the nation’s problems, and to be the voice of the dispossessed.  He bullies his opponents, he persecutes any media who do not grovel before him, he boasts of his supposed sexual prowess, he has a narcissistic and therefore unquenchable thirst for public adulation, he is openly contemptuous of formal legal restraints, and he talks constantly of restoring the nation to its former grandeur.  To bolster his political base he uses the latest social media to speak as directly as possible to his followers, cutting out traditional forms of governmental and journalistic intermediation.  And he loves to make lots of absurd and expensive promises, often in the form of spectacularly ridiculous government projects, many of which are designed to keep out or expel contaminating and subversive foreign influences.

All of this raises the question of how Trump has managed to smuggle (unconsciously, no doubt, as the odds Trump knows what the word caudillo means are about as good as the chances of the Raiders winning the Super Bowl next month) this formerly Spanish-speaking strain of authoritarianism across the nation’s apparently poorly guarded ideological border.

I suspect the answer has to much to do with the extent that the United States economy is coming to resemble many a Latin American breeding ground for narcissistic despots.  In terms of relative levels of economic inequality, the U.S. now looks much more like Latin America than Europe, and the trend is only getting stronger.  As Omar Encarnacion notes:

In classic caudillista fashion, Trump has been quick to exploit the anger of those whose economic livelihoods have been upended by declining incomes, especially the white working class. He has bashed “the establishment” for neglecting “the little guy” and promised to bring back jobs outsourced to China and Mexico by forcing American companies such as Apple to produce their goods at home and by renegotiating international trade agreements. Trump has also displayed a penchant for demagoguery that few caudillos, past and present, could match. Central to Trump’s plan to “make America great again” is to build a wall from the Pacific Coast to the Gulf of Mexico that would keep “rapists, drug dealers, and criminals” from entering the United States; to impose a moratorium on Muslims entering the United States; to allow torture as a weapon in the fight against the Islamic State (ISIS); and to “open up” libel laws that would allow for the prosecution of journalists who criticize public figures such as himself. In pushing for these policies, Trump, like many caudillos, has capitalized upon his status as a political outsider. This status, Trump argues, best allows him to blow up the current political system and to replace it with something that would work for everyone, but especially for those feeling left behind.

Of course there are vast differences between the United States and the Latin American countries in which caudillismo has flourished, but if there’s anything the last year should have taught us is that banking on the supposed health and resilience of American political and cultural institutions is looking like an increasingly shaky bet.

All of which is to say that, especially now, it would benefit us all to pay much more attention to both the history and the present circumstances of our various southern neighbors.