This is the grave of John Eaton and Peggy O’Neill Eaton. 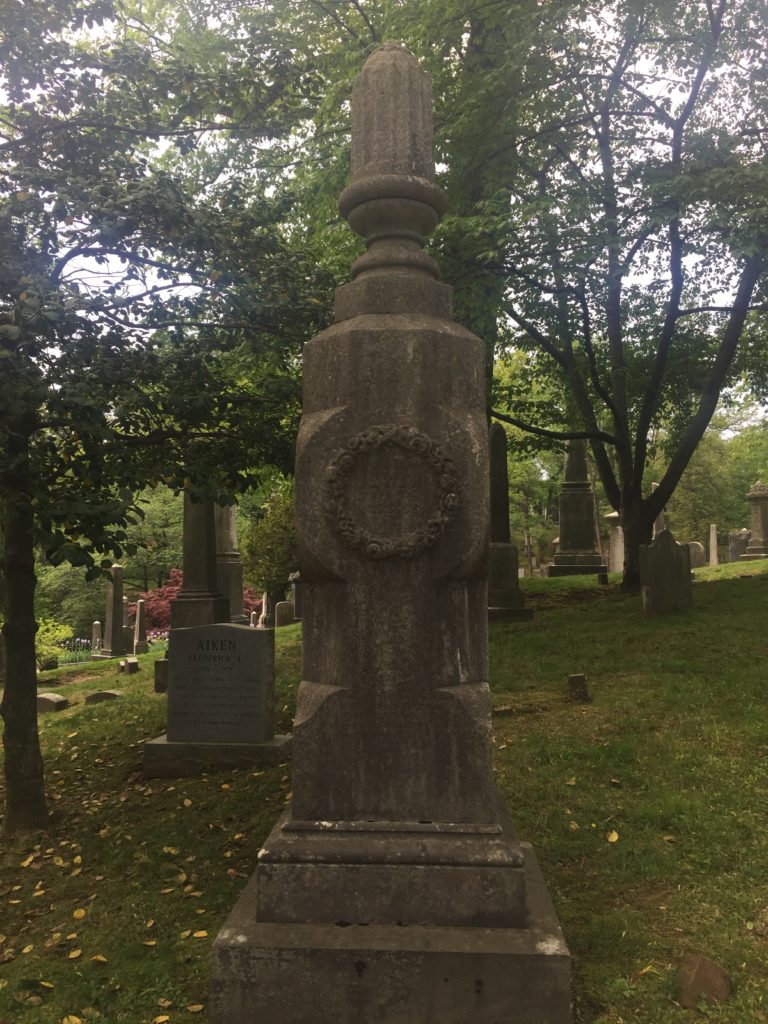 Born in 1790 near Scotland Neck, North Carolina, to a landowning and political family, the Eatons had landholdings in Tennessee as well and became prosperous slaveholders in the new nation. Eaton graduated from the University of North Carolina in 1804, studied law, and moved to Tennessee to start a practice. He became an active in the state militia and was close friends with another rising star of the Tennessee frontier–Andrew Jackson. Eaton was an aide during Jackson’s campaigns against both Native Americans and the British in the War of 1812. In 1815, he joined the Tennessee House, but being very close to the rising star, not to mention a major booster of Jackson, he was sent by the Tennessee legislature to the U.S. Senate in 1818. This was actually a violation of the Constitution–he was only 28 and you need to be 30. But the Constitution was conveniently forgotten about in this case and he was seated; in fact, he was not the only senator in this age to not be 30 upon arriving in Washington. Eaton wasn’t a particularly active senator in terms of leadership. Mostly, he serve as a loyal advisor within the Senate to Jackson’s interests. That included finishing a biography of Jackson that another friend and begun before dying, all set up to increase the general’s possibility of winning the presidency.

In 1828, Jackson did defeat John Quincy Adams and went to the White House. Naturally enough, he named Eaton Secretary of War. Eaton’s first wife had died in 1815, not long after they had married. In 1828, he married his second wife, Peggy O’Neill Timberlake. She was born in 1799 and her parents ran a popular DC hotel. She was known for her great beauty and charm. She married a man named John Timberlake in 1816. She was 17, he was 39 and a member of the Navy. In 1828, he was on a 4-year voyage when he died on a ship in the Mediterranean. Shortly thereafter, Eaton and Peggy Timberlake married. The Washington wags speculated that they had started their affair before his death and that he killed himself upon finding out, although medical examiners at the time noted his bad heart and the fact that he had pneumonia. Eaton and Timberlake were in fact friends. Eaton had actually tried to get the Senate to pass a bill paying off Timberlake’s debts! To say the least, his fellow senators did not go along. Moreover, the Mediterranean assignment was prestigious and one that Timberlake had to fight for; Eaton used his political connections to help him get it.

In any case, this seemingly minor issue would define the early years of the Jackson presidency. Eaton was perhaps Jackson’s best friend. Jackson himself hated the media, who he claimed had driven his wife to her death (in fact, she had a bad heart) by claiming they had married while she was not yet divorced from her first husband and thus was a bigamist. The other members of Jackson’s Cabinet came from typical elite backgrounds or had grown into the new elite. Their wives simply shunned Peggy Eaton. This infuriated Jackson. When he couldn’t convince his Cabinet to accept her, he simply either fired or ignored those in his Cabinet. This had major implications. One of the biggest leaders of this snubbing was the wife of John C. Calhoun. All this helped drive Calhoun and Jackson apart, which would come to a head during the Nullification affair, when South Carolina threatened treason in defense of preferred tariff rates on their slave-produced cotton. Moreover, among those who supported Eaton and Peggy was Martin Van Buren, who quickly became the president’s top lieutenant in the aftermath. Basically, this issue was used as a wedge to split already existing factions of the Cabinet. Calhoun’s influential newspaper editor friend Duff Green for instance blamed Eaton for using the issues around his wife to get rid of Calhounite members of the Cabinet such as Secretary of the Treasury Samuel Ingham and Secretary of the Navy John Branch. What eventually happened is that Van Buren led a mass resignation of everyone, including Eaton, so Jackson could simply start again. Yet, just as this was happening, Eaton challenged Ingham to a duel and when the latter refused, had to hire bodyguards because Eaton and his friends were planning to assault him.

Jackson and Eaton were still good friends. First, Jackson named him governor of Florida, then ambassador to Spain. A more important bit of the aftermath was that Jackson named Van Buren minister to Britain. A tie vote allowed VP Calhoun to kill the nomination. He famous crowed it would “kill him, sir, kill dead. He will never kick, sir, never kick.” Instead, Jackson named Van Buren his VP for his second term and Calhoun was exiled out of national leadership and toward an increasingly extreme sectional leadership.

Despite Van Buren’s help in the situation over Peggy, Eaton and he had a falling out, largely it seems because the Spanish government had enormous contempt for Eaton (they basically thought he was an idiot) and Van Buren did not defend him. He did not support Van Buren’s 1840 reelection campaign and endorsed William Henry Harrison. That then led Jackson to disown him. Eaton split the rest of his life between DC and Tennessee, restarted his law practice, and became a prominent member of Washington society. He died in 1856.

In 1859, Peggy Eaton married an Italian music teacher named Antonio Gabriele Buchignani. She was 59, he was 26. Scandal had returned, but she didn’t care. She had already lived through it. Unfortunately, in 1866, Buchigani ran off to Italy with Eaton’s 17 year old granddaughter Emily Randolph and most of Eaton’s money. They divorced in 1869 so he could marry Emily. She never recovered her finances though and died in poverty in 1879.

Joan Crawford played Peggy Eaton in a 1936 movie based on her life. The title: The Gorgeous Hussy. Franchot Tone played Eaton. John Barrymore is Andrew Jackson. I should probably find a way to watch this.

John and Peggy Eaton are buried in Oak Hill Cemetery, Washington, D.C. Their names are inscribed on different sides of the memorial, but John’s is pretty heavily faded, as you can see.

If you would like this series to profile some of the other people mentioned in this sordid, ridiculous story, you can donate to cover the required expenses here. I think we all know I need to go to South Carolina to visit Calhoun, as well as the many, many, many other fine political figures from that state’s lovely history. Previous posts in this series are archived here.