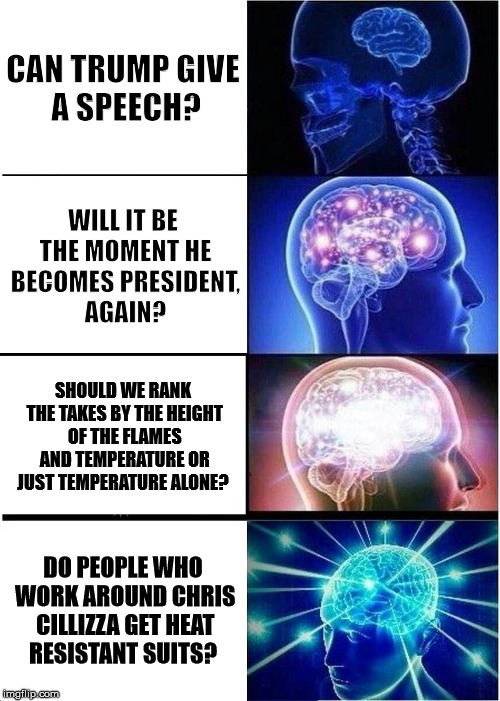 As the clock ticks towards the White Supremacist-in-Chief’s first State of the Union speech, one question is burning a hole in minds of avid DOPUS watchers:

Will he manage to read a prepared speech from a teleprompter?

President Trump will deliver his first State of the Union address Tuesday at a juncture of opportunity and peril for his presidency, and his anxious allies hope he will show he has the ability to do something he has not done before: bring the country together.

Ha ha ha. But one should resist the temptation to write off his anxious allies as simps. All his anxious allies — Republicans who still occasionally look constipated when their leader shouts the quiet parts out loud — want is a speech that they can point to as proof of his presidential bona fides, proof that the decades of being a moronic loud-mouthed bigot and general slime don’t count, and proof that his critics should shut up and let the man Lead despite any future bouts of moronic loud-mouthed bigotry and general sliminess.

In tone, they say, it will not be like the fiery populist inaugural address, in which Trump offered a dark picture of “American carnage.” A senior administration official who has been involved in the drafting promised “a speech that resonates with our American values and unites us with patriotism.”

Given the way Republicans think about things, it could be the same damn speech given to a slightly larger crowd.

The larger question is whether Trump can expand his appeal beyond his ardent base to reach the majority of Americans who are responsible for his historically poor job-approval ratings.

The even larger question is whether members of the press will ever stop asking stupid questions, such as will one speech mollify people who have had this guy’s number from the start, and have had their worst fears about him confirmed over the past couple of years?

Or at the very least, will they start asking those people what they think, rather seeking the opinions of members of Team Republican Professional Has-been?

“Coming off the tax cuts and the trip to Switzerland, he’s in a position to be very presidential, and my hope is he will speak as the leader of the country and would offer a series of proposals that would bring us together,” said former House speaker Newt Gingrich, a Trump adviser and defender. “I don’t think this year he needs to speak to part of America. He needs to speak as president.”

A good question for a reasonably alert reporter to ask is why should anyone expect Orangino to speak to the entire nation when he was elected president by speaking to ahem part of America ahem and continues to have high approval ratings among the part of America that voted for him? Perhaps one day. Maybe.

Republican Judd Gregg, a former New Hampshire governor and U.S. senator, counseled that Trump should tamp down his tendencies to personalize every issue and instead look outward: “Optimism is the key word — optimism that isn’t self-congratulatory, hopefully.”

But the largest question of them all, the question that everyone knows to answer with a resounding LOL, no, and so makes an article about the value of messaging a bit pointless, is this: Will white supremacy’s poster boy — by word and deed — be able to maintain whatever optimistic, unifying, uplifting, bipartisan tone set by his speech, for more than 48 hours?

Even if the State of the Union address lives up to the White House’s billing, there remains the possibility that Trump will do what he has done in the past: step on his own message.

Just days after his carefully crafted address to the joint session last February, for example, Trump detonated a string of tweets accusing Obama of having wiretapped Trump Tower, declaring, “This is McCarthyism!”

Trying to guess what will set off the post-SOTU meltdown is a far more amusing way to spend one’s time. The article mentions Mueller’s ongoing investigation — with lots of references to Bill Clinton thrown in for Balance — and I assume the investigation or Mueller himself will be the Topic du Tantrump. But I guess it will ultimately depend on what Fox & Friends is plotzing about on Thursday morning.