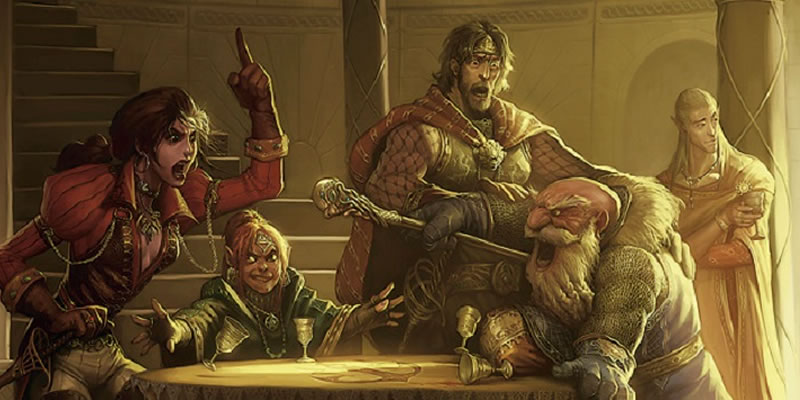 Last time, a slightly desperate conman who’s down one soul, a heavy metal bard in league with the original party fiend, a wild magic obsessive let loose from Fantasy Catholic School, and the one honest cop in Braxtonshire were tasked with breaking up a drug ring in the Halfling Quarter.

Our first raid didn’t go much better than the one in “The Buys,” but at least we got dope on the table.

How will things go haywire this time?

In what is clearly a brilliant decision, we decide to split the party. Team Warlock, being more chaotic types who don’t have a problem with trashing some dude’s house, will case the Threenuts residence while the cleric/sorceror and the paladin stay at the crime scene until the City Watch shows up with a wagon to cart away all the drugs.

As Sera and Tomas casually stroll down the street, talking about the nature of how one sells or loses a soul in rather roundabout turns because Rhymer is a bit paranoid and Sera is too smart to give information without getting it, they case the joint. The Threenuts house is a “mid-fantasy modern” two-story affair with a partial attic on top, made of wood and brick with a grand front door (quite visible from the street and protected by a deadlock). There’s no no clear backdoor, but a good Perception roll reveals a small cellar door in the back guarded only by a padlock. Meanwhile, Lysander guards the ruins of the crack home, keeping a bunch of halfling looky-loos (in halfling culture, stories are the most important cultural and social activity, so having a good story about what happened is important) away. He notices at one point a human in the crowd, wearing a tall hat, but the man disappears into the crowd before he can do anything. Downstairs, Telfer is investigating the cellar’s inventory of hard drugs instead of grappling with the moral consequences of murder. As the only one in the party with any kind of medical training, he realizes that the half of the mason jars which are lilac in color are Fantasy Heroin and the ones which are black in color are Fantasy PCP, but neither are of great quality. He’s not sure what the smaller vials with the Hangtooth logo are.

Team Warlock returns to the group at the same time as a City Watch wagon shows up with Corporal “Donkey” Shane and Checkum Threenuts riding on it. Shane is shocked by the half-orc body and demands to know what’s going on, with especial emphasis on that our orders were to avoid the loss of life. Lysander thinks about it for a moment…and describes the events of the raid on the crack home completely honestly. Despite that full accounting, Shane decides to racially/classistly profile Tomas as the shooter. With a stellar Persuasion check, Tomas carefully explains that he was attempting a non-lethal takedown of the guard, while at the same time using a superb Deception check to explain that the padlock on the cellar door was unlocked when we got there. Junkies, huh?

After this, we begin ferrying the drugs up to the cart. When we’ve got about half the inventory on the cart, Checkum drops a jar and the same fire that happened when Sera knocked over the jar during the raid bursts out. Suddenly half the inventory goes up like flashpaper, and the donkey is starting to freak out, threatening the rest of the evidence. Acting on some unconscious instinct, Tomas makes a hand gesture and the donkey falls asleep (first time casting Sleep; not the last). With the cart set to rights, Telfer discovers that the bottles have been enchanted to act like flashpaper, allowing for their quick destruction during a raid. The rest of the drugs are loaded onto the cart – very carefully – along with the body of the unfortunate half-orc guard, who is shielded from the extremely curious view of the crowd (and there is no crowd more curious than halflings) thanks to a timely Minor Illusion from Sera that prevents another riot.

At this point, Team Warlock takes Telfer to go do his sorcery thing and take a look at the Threenuts house. The clericomancer promptly casts Detect Magic and sees a whole host of Abjuration spells throughout the building, but not in the cellar. That’s good enough for Tomas, who just barely cracks the rather well-made padlock on the cellar door, pocketing the padlock for practice later on. Unfortunately the cellar is full of purely mundane objects.The team moves on to upstairs…

Meanwhile, Lysander is giving Checkum the third degree about what he knows, now that his Chaotic party members are upholding their part of the bargain. Checkum is not the smoothest customer, so he draws a map to Hangtooth’s hideout and tells the Paladin he knows the password, although he won’t say the name out loud.

Meanwhile, the first floor reveals nothing more than a kitchen and dining room, a half-eaten plate of cookie, and some meaningless receipts in the secretary, although there is some silverware and some candlesticks for Jean Valjean to steal. And this is where everything goes wrong. 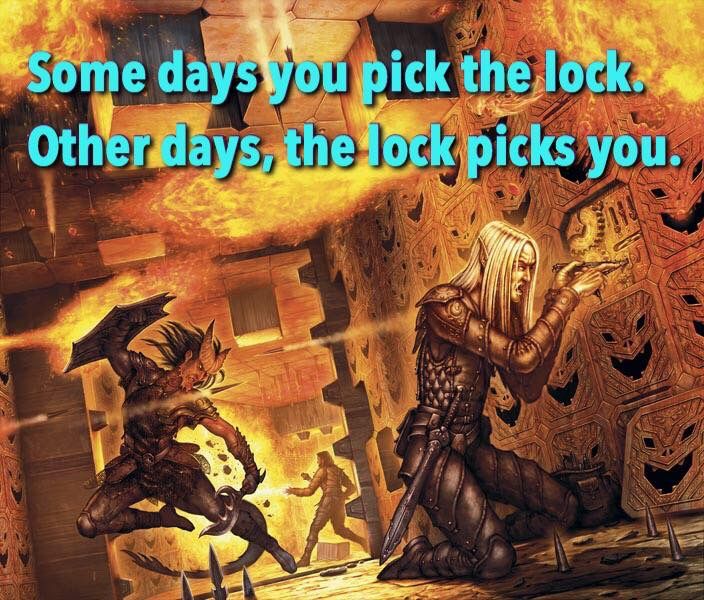 It turns out that the Checkums’ relative lax home security is due to their having purchasing a Charlie system – a magical AI alarm system which detects us whether we pass our Sneak checks or no. Tomas tries to bluff the system with Deception and fail…at which point Charlie asks psychically whether he’s undead because the scans don’t show that Tomas is in possession of a soul. Tomas sweats nervously as the others hear this.

Figuring that we might as well ransack the place if we’ve been made, we make our way to the second floor, where we find out that the Threenuts have a murderous attitude to home security worthy of Kevin Macallister. The rogue almost instinctively hops over a trapped stair and avoids the spiked log trip, seeing three doors at the top of the stairs. Carefully checking the three rooms by having Sera use Mage Hand to open the doors remotely (Tomas learns how to use Mage Hand in the process), we avoid a poisoned dart trap…only to stumble into a magical trap that makes us walk with the loud squeaking sound of clownshoes. We also find nothing of any value. 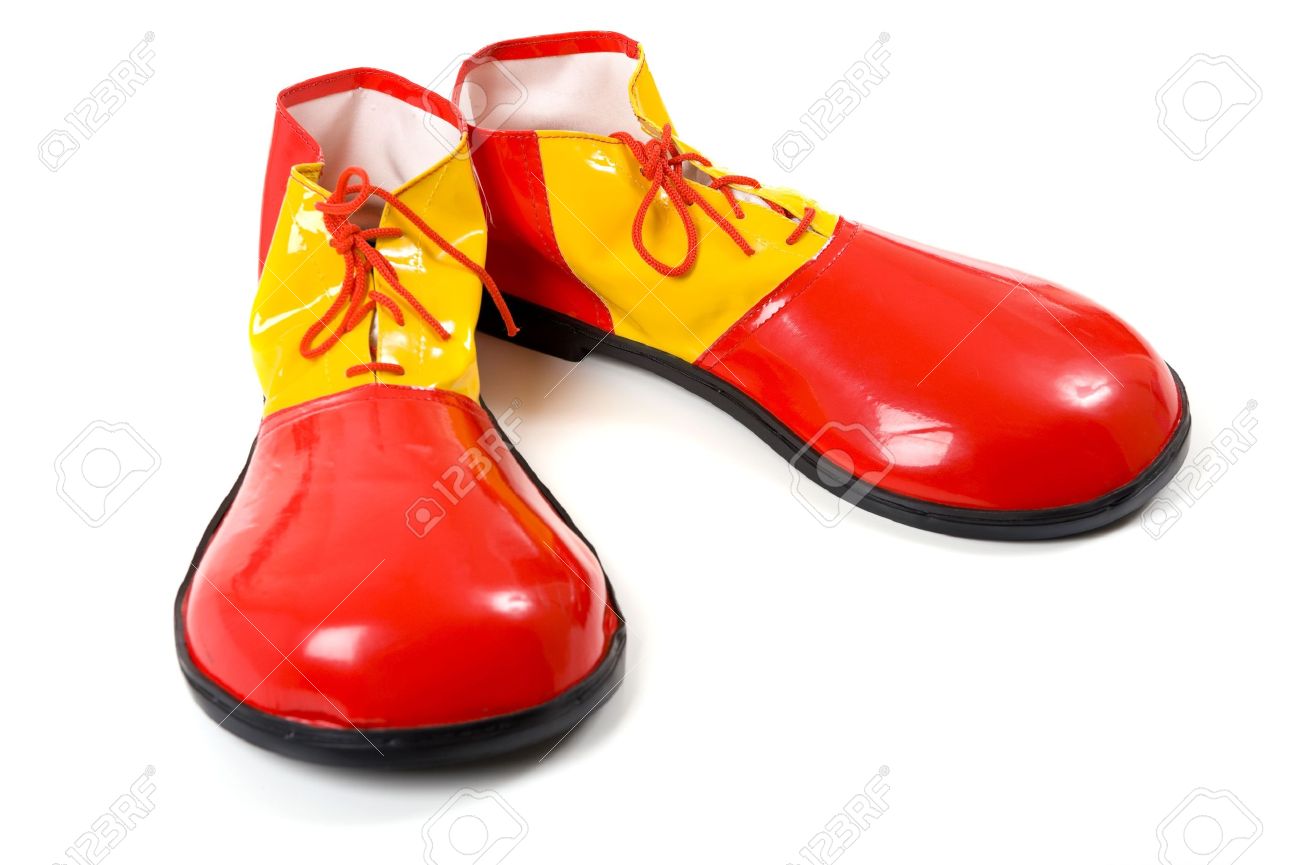 With no use left for Stealth checks, we decide to check out the attic, where we realize that the alarm doesn’t cover the third floor. This is because this is where the Threenuts matriarch and patriarch hide their illegal stuff, like a thieves’ map showing various criminal hideouts, including Hangtooth’s. Unfortunately, breaching the attic automatically teleports the Threenuts home.

We’re now placed in the position of how to handle the parents of a kid who hired us to trash his house, while technically on the City Watch payroll. Tomas and Sera decide to bluff the parents, pretending that we were friends of Checkum. Telfer decides to jump out of the third story window, and rolls very very badly on his Dex saving throw, damaging himself badly as he hits the ground. Sweating slightly but smile perfectly intact, Tomas and Sera successfully manage to bluff the parents (Sera succeeds slightly too well, convincing the father so well that she’s an age-appropriate friend of Checkum that he starts to look a little too interested)…up until Charlie speaks up and contradicts our story.

We book it out the door at top speed, and keep going once we reach the wagon (although thankfully by this point, Lysander has successfully interrogated Checkum to fin out that the password is “winterthistle”) and don’t stop until we’re out of Tinytown. As he runs, Tomas experiences resentment of magic more strongly than he has ever before; as far as standard thievery goes, he did everything right and the magic completely invalidated all of it without any ability to counteract this. This burning sense of justice leads him to make a silent vow that he’s going to find some way to level the playing field…

After the obligatory “Yackety Sax” montage, we manage to make our way back to the city to a dive bar we don’t normally visit to examine the map…which is written in Halfling. Neither the rogue/warlock, the bard/warlock, or the paladin speak Halfling, but thankfully the cleric/sorceror did learn Halfling at Fantasy Catholic School and he points out a hideout on the side of a hill mound labelled Hangtooth and the word “Blackacre” written next to it.

The group decides to go for Hangtooth’s lair…once we visit a temple of Sukkoth to get the dread Curse of Clownshoes removed. (Tomas takes every pamphlet there on the off-chance that it might say something about the soul, much to the surprise of the cleric manning the night shift.)

Once night has falled, the party creep out to a rocky outcropping that overlooks the Halfling Quarter. Tomas sleeps the guard dogs outside and we quietly make our way down a long cavernous hallway with a strange crease running along the top, with a heavy-looking door at the end. We talk up to the door and a voice on the other side demands the password. We reply “Winterthistle,” which turns out to be an old password and the crease opens up and two human rogues drop down on top of us.

Thankfully, we are much better at fighting than passwords, and the rogues in question get dropped in quick succession, with Sera Hexing and Eldrich Blasting one of them, and Tomas sneak attacking the other one. Lysander and Telfer stabilize them, remembering that we’re not supposed to kill anybody. This time, when we knock on the door, we give “Blackacre” as the password and either because that’s correct or the gnome inside doesn’t want to mess with us anymore, we’re let inside. A long hallway leads to a wooden door and the “hangout” room of the den, where four rogues are playing poker around a table when we walk in. More fusticuffs result: Lysander’s shield saves Tomas from a nasty stab, while Sera Eldrich Blasts one; Telfer casts sleep, and two out of the three remaining rogues fall asleep. The remaining rogue attacks Telfer, but Tomas Eldrich Blasts him. At this point, Sera successfully intimidates the guy into surrendering and we move on to the next room.

This room is the drug gang’s storerooms, and we find large stores of both the mason jars and the vials – Tomas hands one to Lysander so that a suspicious fire can’t wipe out all the evidence. We also find a chest which, after Tomas has been next to it for five seconds, turns out to be unlocked. The party splits 160 gold.

In the next room, we see an old goblin woman stirring a huge cauldron. When she turns around, the kindly visage does indeed have a large hangtooth! After saying something cryptic about her drugs not being magical at all, Hangtooth summons a lion and we go into combat.

Lysander takes a swing at the lion and misses, but thankfully Tomas’ Fey Presence successfully Frightens the apparently cowardly lion. Telfer casts Guiding Bolt, which helpfully marks the lion, which attacks him in response and misses due to having Disadvantage from being Frightened. Meanwhile, in the clutch play of the game, Sera successfully casts Tasha’s Hideous Laughter on the powerful druidess Hangtooth and knocks her out of the combat repeatedly as our DM fails to roll well on Will saves. In the meantime, we’ve still got a lion to deal with: Tomas sneak attacks the lion, wounding it further, but the lion still has claws and no longer frightened, it hits Telfer for 18 points of damage, dropping him to the ground. Sera kills the lion with an Eldrich Blast, Lysander heals Telfer, and we have actually won!

And that ends Session 2!