This is not the first time Brooks’ increasingly-more-maudlin columns have been documented, but I’m not sure they’ve ever been documented in such exhaustive and hilarious detail. 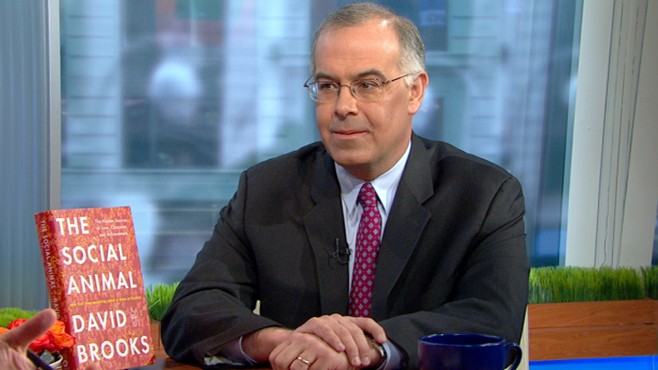 I’ve been a pretty regular reader of the New York Times columnist since before he even came to the Times, going all the way back to his seminal 2000 book Bobos in Paradise: The New Upper Class and How They Got There, which revealed, to the astonishment of various residents of the East Coast media world’s upper crust, that the rich white people of the Clinton years were different from previous generations of rich white people, because they used their money to buy elite refrigerators instead of jewel-encrusted top hats.

Speak for yourself, dude. Some of us super-classy elites do both. Me, I bought a jeweled refrigerator in the shape of a top hat because I am a tastemaker.

You’d see a headline like “The Slow Virtues” or “The Hollow Century” or “Why the Teens Are Despicable,” and you’d know ol’ Dave’s coffee shop was out of plain croissants a week ago and the barista had a nose-ring and he’d decided he’d witnessed the death of the Western moral tradition.

In fairness, the barista was wearing the nose ring on his toe and was serving the coffee with his feet. They call it “coffee-surfing.” It’s the new planking. Millennials.

David Brooks is telling us something dark and sad—about loneliness and the search for connection; about social desolation and sexual frustration and sadness. Something deeply personal, about discovering, too late in life, that accomplishment and position and thinkfluence are no ameliorative for the rejection of your gross old-man wiener by cute millennials. Something not about what priorities he guesses Whole Foods Uncles will take into the voting booth in 2016, but about himself.

The hot millennials do not want a New York Times columnist from whom to receive stimulating discourse about the moral and attitudinal deficiencies of the poor. No, they want a “not-repulsive person” who “does not look like a waxed talpid,” thanks to some cockamamie notion that “sexual attraction” might be a more fruitful basis for a relationship than “being lectured by a fusty boomer pissbaby about how masculine chivalry is the bedrock of civilization and both were destroyed by the sexual revolution.”

I got nothin’. Nothin’ but applause. This guy is good.

David Brooks sent his ex a dong shot. And then used his New York Times column to tell the world about it. Our man perches upon the edge of The Void, and hears its howl. Does it call his name? Or does he only want it to?

This is bad, sure, but I’m not checking on David ’til he sends a tweet saying simply “Poopin’.” Then again, I guess this guy is arguing that David’s been sending that long-form tweet for awhile now.