When my son became obsessed with dinosaurs (with a little prompting from me) I wasn’t exactly heartbroken. I’ve always been a dino-lover, and my son’s interest in them gave me the perfect excuse to treat them as something of a hobby. My son and I do research on dinosaurs together–“I don’t know a whole lot about this dino; let’s look her up”–but I’ve been going off on my on own to learn about more about prehistoric creatures, too.

One of my favorite things to do is to go back as far as I can in the earth’s history–before it seems like everything just devolves into trilobites–and find bizarre creatures to marvel at. (The weirder and more nightmarish the better.) It looks like things really started to get interesting–evolution-wise–during the Devonian Age. Check out Dunkleosteus, a huge, armored fish.

One thing that’s always frustrated me is that if you’re a casual researcher like me, it’s pretty hard to find a good repository of Triassic dinosaurs–they always seem underrepresented. I’ve come to the conclusion–because DUH–it looks as though things didn’t really get warmed-up dino-wise until the Jurassic. So, what’s a frustrated creature-hunter like me to do? Find freaky Triassic creatures like this!!!:

And then there’s Mosasaurus, an amazing killing machine from the Cretaceous. 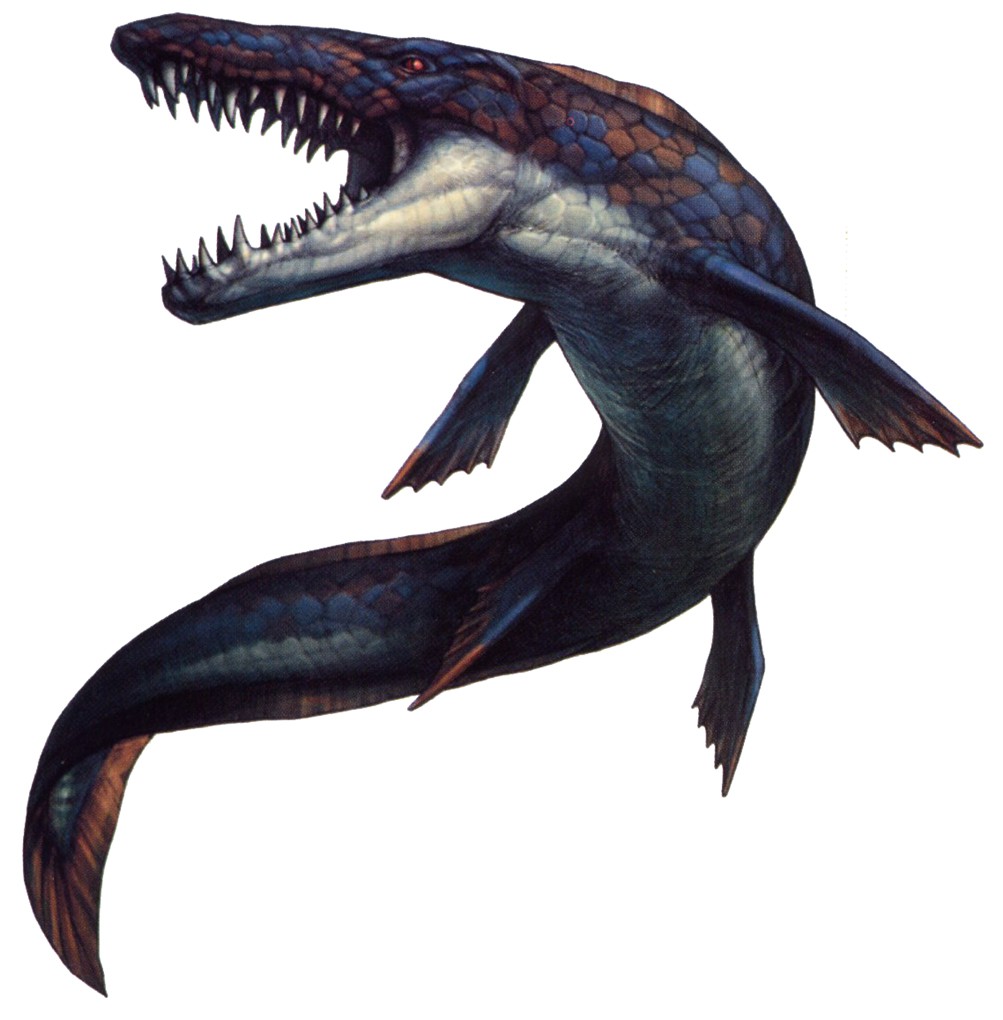 Neat, huh? I almost kind of just want to keep posting creature pictures. But I’m actually posting these for a reason. I just wanted to let you know that Mother Nature is a freaky weirdo with a sick sense of humor. No, I’m kidding. Really what I wanted to say was I don’t know how you look at these creatures and not see (ugly, freaky) evolution in action. Especially with the Mosasaurus, who is clearly a precursor to creatures that are still around today–gators and crocodiles.

And when you really get into dinosaurs, you quickly see they are really just a motley collection of missing links, exhibiting characteristics that are at once reptilian, birdlike and even fishlike.

Here’s the Spinosaurus, a monster from the Cretaceous– a fish-eater with almost-crocodilian jaw, the body of a massive therapod, and a sailfish-like sail on its back.

And, of course, if you follow dinos from the Triassic to the Cretaceous, it’s obvious they’re basically turning into birds.

So, to sum things up, I don’t know how someone can know anything about the history of our world and deny evolution. I mean, it’s slapping us right in the face. For crying out loud–Bear Dog!!!