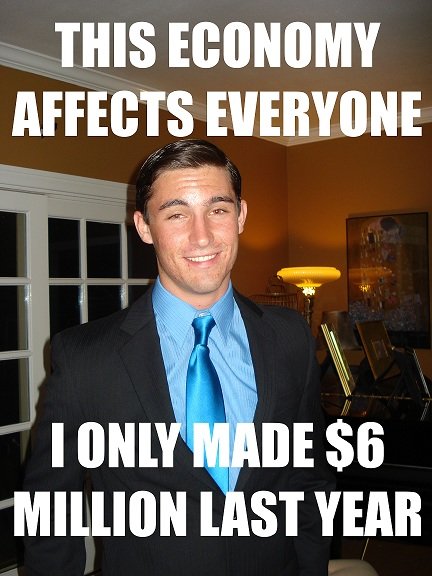 Via TPM and various publications linked therein, scenes from a Romney fundraiser:

While a group of Occupy Wall Street protesters assembled in the area, the Porsches, Range Rovers and BMWs streamed in. Here are some of the best quotes from the events.

A gem from the Los Angeles Times:

A New York City donor a few cars back, who also would not give her name, said Romney needed to do a better job connecting. “I don’t think the common person is getting it,” she said from the passenger seat of a Range Rover stamped with East Hampton beach permits. “Nobody understands why Obama is hurting them.

Peter Cohen, the former Shearson Lehman Bros. chief, told the Associated Press — while chewing on a cigar — that Romney is a “plain-talking guy.”

Ted Conklin, who owns the American Hotel in Sag Harbor, told the New York Times that Obama is a “socialist.”

“His idea is find a problem that doesn’t exist and get government to intervene,” Conklin added, his wife, Carol Simmons, nodding beside him in their gold Mercedes.

But wait, there’s more. From the Times:

Ms. Simmons paused to highlight what she said was her husband’s generous spirit: “Tell them who’s on your yacht this weekend! Tell him!”

Over Mr. Conklin’s objections, Ms. Simmons disclosed that a major executive from Miramax, the movie company, was on the 75-foot yacht, because, she said, there were no rooms left at the hotel.

From a letter from Lady Oxford to the Daily Telegraph, on the subject of war economies:

“Since most London houses are deserted there is little entertaining… in any case, most people have to part with their cooks and live in hotels.”

Apparently nothing will ever teach these people that the other 99% of the population exists.

Update: Things you learn from wikipedia: Helena Bonham Carter is Asquith’s great-granddaughter via his first wife.