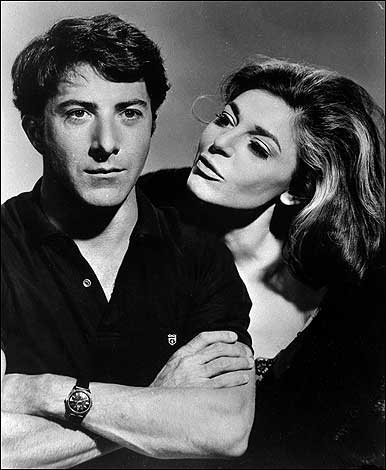 One of the more excruciating scenes in the 1967 film The Graduate, which centers on an aimless young man who can’t figure out what he’s supposed to do with his life after graduating from an Ivy League college, takes place when the protagonist attempts to have an actual conversation with the middle-aged married woman with whom he’s having an affair. Desperately fishing about for a topic, he tries to get her to talk about art. She refuses, stating that this topic holds no interest for her. Moving on to more personal questions, he goes on to discover that she is a profoundly bored alcoholic who hasn’t slept in the same room as her husband in five years, and who married him because he got her pregnant when he was a law student and she was a freshman at the same fancy university. The conversation ends like this:

BEN
What was your major?

MRS. ROBINSON
Why are you asking me all this?

BEN
Because I’m interested, Mrs. Robinson.
Now what was your major subject
at college?

BEN
But I thought you – I guess you
kind of lost interest in it over
the years then.

Now I’m actually a big fan of liberal arts education. I believe in learning for its own sake, that knowledge is preferable to ignorance, that civilization is superior to barbarism (whether neolithic or post-industrial), that a genuinely educated citizenry is crucial to maintaining democracy as something more than a word, and all that sort of thing. On a related point, I believe if university academics are going to study and write about law, they should do it in a genuinely academic way, as opposed to cranking out glorified briefs and bench memos that are supposedly “helpful” to lawyers and judges, i.e., traditional doctrinal law review articles. So I have nothing against “Law and . . .” Indeed to the extent that law school is structured as a form of graduate education there should be nothing but “law and.”

But law school should not be structured as a form of graduate education, because structuring that way makes it cost far too much. It’s a mistake to think that law school used to be cheap but is now expensive. Law school was always expensive, even a generation ago when Harvard cost barely more than $10,000 per year in 2011 dollars, and resident tuition at state law schools was almost nominal (the University of Colorado’s law school tuition 30 years ago was $975, i.e., about $200 per month in real current money).

Law school has always been expensive because the opportunity cost of going to law school has always been high. Taking yourself out of the labor market for three years at the beginning of your working life is a very costly investment in your future. So a generation ago, when private school tuition was in real terms a fourth of what it is today and public law school tuition was practically free, law school still cost a lot in real economic terms. Today, of course, the cost of law school has gone from significant to basically insane. On top of the opportunity cost you’re supposed to borrow at very high interest rates a sum of money that would outright buy a fairly decent three-bedroom house in many parts of this fair nation.

At no time in the past would the present cost of law school have made sense for anything approaching a majority of law students, and looking forward it makes even less sense. It’s one of those things, like three-bedroom houses in Las Vegas selling for $600,000 in 2006, that happened because it was in the interest of powerful political and economic interests for it to happen, not because it made the slightest degree of sense as matter of rational social action.

Law school in America has developed or devolved into a kind of faux-graduate school experience, in which with limited exceptions less pretense than ever is made of engaging in vocational training. But here’s the punch line: Do you know what graduate school generally costs? Nothing. Now this isn’t true at all in genuine economic terms, as graduate students still incur big opportunity costs and avoid paying tuition by providing plenty of slave labor to keep the wheels of the great American university system turning. Of course at the end of all that there’s a good chance graduate school will end up not being worth it, since the large majority of graduate students don’t end up getting anything like the jobs they went to graduate school in order to get. In other words they’re just like law students, minus the six-figure high interest non-dischargeable debt.

Law school as graduate school is very much a luxury that the vast majority of people who are forced to purchase it can neither afford, nor would they want to buy even if they could actually afford it. This was true when it was practically free, but it’s far more true today, when the total cost of attendance at many schools is approaching a quarter million dollars.

This, I think it’s fair to say, represents something of a market failure.