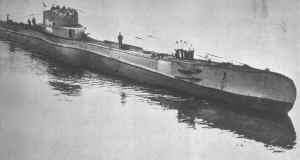 In February 1917, the German Navy resumed unrestricted submarine warfare after a two year break. The campaign was launched in an effort to drive Great Britain out of World War I. Weak British tactics helped produce enormous early successes for German U-boats. For a time, British supply lines from the United States were seriously threatened. The entry of the United States into the war, however, and the development of convoy tactics staunched the bleeding for long enough to allow an Allied victory in France. Although the German submarine offensive of World War I failed to force Britain out of the war, it succeeded in threatening the Allied war effort.

Like the rest of the German Navy, the surviving U-boats were scrapped post-war or distributed among victorious allied navies. Some efforts were made to restrict submarines in the inter-war period, but in the end no significant action was taken. Remarkably, apart from Germany most interwar navies did not strongly consider the possibility of another major submarine anti-commerce campaign. Rather, submarines were valued for the threat they posed to enemy capital ships. Both the United States and Japan, for example, envisioned submarines as part of a Mahanian trans-oceanic campaign. Weapons of the weak, submarines could help equalize the odds for small navies.

Poland had one of these small navies. After two centuries of subjugation to foreign powers, Poland had regained its independence at the end of World War I. The primary military threats to Poland were the Soviet Union and a potentially revanchist Germany. In 1920 and 1921, Poland fought a war against Soviet Russia, finally defeating a major offensive led by Mikhail Tukhachevsky at the gates of Warsaw. Victories in the Polish-Lithuanian War and the Polish-Ukranian War helped expand the borders of the new state. Although land warfare represented the most dangerous threat to Poland’s existence, the new Republic nevertheless began development of a navy.

In February 1939, the Polish Navy took delivery of ORP Orzel, an 1100 ton submarine built in the Netherlands. Orzel could make 19 knots surfaced, 9 knots submerged, and carried 12 torpedo tubes. Although the Poles planned to use her for coastal work within the Baltic, she was actually a bit large for the envisioned mission. Orzel (meaning Eagle) was accompanied by her sister Sep (meaning Vulture). Due to Dutch fears of a Polish-German War, Polish sailors were forced to essentially steal the nearly complete Sep during trials in April 1939. Bad feelings between the Dutch and the Poles were smoothed over by full payment and the return of the two Dutch specialists who had inadvertantly been kidnapped along with the boat.

By September 1939, the Polish Navy had grown to include five submarines and four destroyers. Unfortunately, this force was no match either for the Kriegsmarine or the Soviet Navy. German threats against Poland had grown through 1938 and early 1939, and in late August 1939 the Molotov-Ribbentrop ensured Soviet neutrality in the event of a Polish-German war. A secret part of the agreement divided Eastern Europe between Russia and Germany, with Germany to control Lithuania and much of Poland, and the Soviets to control Finland, part of Poland, and Estonia and Latvia. Eventually Lithuania would be traded by the Germans for more of Poland. In any case, the agreement left Germany with a free hand against Poland, apart from the threat of intervention by France and the United Kingdom. 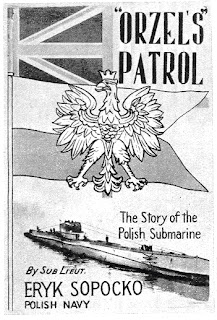 On September 1, 1939, German forces invaded. Polish forces were outflanked and overmatched. The Poles fell back to the east, but their position was rendered hopeless by the invasion of 800000 Soviets across the Polish-Ukranian frontier. The Poles, nevertheless, exacted a significant price on the German invaders. Before the battle ended in early October, 140000 Polish soldiers escaped to either Romania or Lithuania, with most fleeing from their to the West. These troops served in Allied supplied and organized units for the rest of the war. The Poles who failed to escape would suffer some of the most devastating atrocities of the Second World War. Including Jewish deaths in the Holocaust, over 18% of the pre-war Polish population would die between 1939 and 1945.

The Orzel was among those to escape. After slipping through a German minefield, she broke into the Baltic, and began hunting German targets.