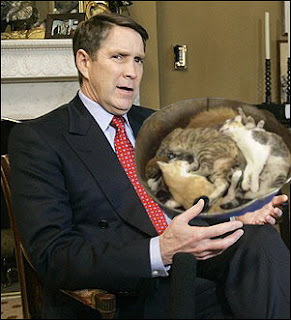 Today, I am sorry to report, concludes another year of Bill Frist’s unwholesome existence. Happily for all, though, Frist’s 55th birthday marks the first time since 1995 that he’s not passed his special day violating the Hippocratic Oath by representing Tennessee in the US Senate.

Frist’s birthdays in the Millionaire’s Club were likely more eventful than this one will be. His 45th birthday must have been something of a downer, for example. It was on that day that a group of scientists in Scotland announced that a sheep named Dolly had been cloned; as Frist ruefully prodded his cake and ice cream that night, he must have wondered what the announcement meant for the future of human cloning, which he resolutely opposed. Several years later, on Frist’s 53rd birthday, issues of Life and Death were once again on the minds of Good, Decent Americans like Bill. The Senator had no doubt already heard about the plight of one Terri Schiavo, but he had not yet demonstrated his patented VHS diagnostic method to an incredulous public.

In his younger, more carefree days, Bill Frist passed several years as a medical student at Harvard. While studying to be a cardiac surgeon, Frist carried on a secret life as a cat murderer — stealing away to animal shelters in the Boston area, adopting stray felines, “treating them as pets for a few days” before euthanizing and dissecting them. As Frist recalled in his autobiography,

It was, of course, a heinous and dishonest thing to do. And I was totally schizoid about the entire matter. By day, I was little Billy Frist, the boy who lived on Bowling Avenue in Nashville and had decided to become a doctor because of his gentle father and a dog named Scratchy. By night, I was Dr. William Harrison Frist, future cardiothoracic surgeon, who was not going to let a few sentiments about cute, furry little creatures stand in the way of his career.

In short, I was going a little crazy.

Only Frist knows if he suspended his campaign of death each year on February 22. Did he offer his “pets” an extra mound of wet food that day? Did he crumple up a few extra wads of tin foil, or let them play with the wrapping paper from his presents? Did he let them sleep on the bed — a birthday reprieve of sorts before the machinery of death chugged back into action the next day? Only Bill knows.