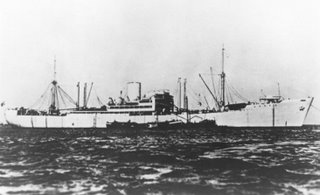 In World War I the German Navy had enjoyed some success with merchant cruisers, civilian ships armed and converted to military purpose. The success of these cruisers never matched that of the German U-boats, but they provided a relatively cheap and effective way of disorienting and tying down Allied surface units. During the interwar period the Kriegsmarine built the three “Panzerschiff”, armored cruisers with long ranges designed for merchant raiding. At the beginning of World War II, the Kriegsmarine requisitioned a dozen merchant vessels for conversion to merchant raiding. The ships received heavier decks, storage space for ammunition, fuel, and prisoners, and an armament of 6 6″, 2 37mm, and 5 25mm guns, along with a pair of torpedo tubes and space for 2 seaplanes.

The eighth and, at 8700 tons, the largest of the German auxiliary cruisers, HSK Kormoran could make 19 knots, but lacked the armor or fire control mechanism of a genuine warship. With Captain Theodor Detmers in command, Kormoran left Kiel on December 3, 1940, successfully avoiding Royal Navy patrols and breaking into the Atlantic. Her first victim was the Greek freighter Antonis, captured without incident on January 6, 1941 and destroyed by explosive charges. As required by the laws of maritime war, the 29 strong crew of Antonis became involuntary passengers on the raiding crews. Kormoran caught and sunk three more merchantmen in January alone. In the process of finishing off the freighter Eurylochus, Kormoran accidentally destroyed a full lifeboat with a torpedo. After meeting with Admiral Scheer and U-105, Kormoran proceeded into the South Atlantic, catching a freighter and a tanker in March and two freighters in April. The tanker, the Canadian-owned Canadolite, was captured, assigned a prize crew, and dispatched to France with the prisoners captured in previous engagements. Two more ships were caught in June, as Kormoran moved into the Indian and eventually the Pacific, and a last freighter was caught and sunk in September near Australia. Detmers’ treatment of the captured crews was in almost all cases correct, and the men of Kormoran took pains to minimize the loss of life on their victims.

On November 19, 1941 HSK Kormoran was cruising off the northwest coast of Australia, near Shark Bay. At 4pm, Kormoran was sighted by a warship about twelve miles away. Detmers replied to the warship’s challenge as the Dutch Straat Malakka. The warship was not satisfied by this response, and closed with Kormoran. It became apparent that the approaching ship was a light cruiser of the Leander class, a ship slightly smaller than Kormoran but much faster, more heavily armed, and armored. The Australian cruiser could catch and kill Kormoran without difficulty if the German ship tried to run. By Detmers’ account, he decided to delay for as long as possible in the hope of surprising the Australian ship at close range; Kormoran’s armament was concealed, and she continued to attempt to signal as Straat Malakka. Although the approaching ship trained its guns on Kormoran, it did not open fire. The surviving Germans tell us that when the Australian cruiser entered within 1000 yards, the 6″ guns of Kormoran were uncovered and began firing seconds later.