I need to start this post by qualifying that I do not identify as a Marxist, even if I am very sympathetic to many tenets of Marxism. While I was studying for my Master’s at SOAS, Marx would constantly crop up. By virtue of location, he was also a regular part of student life. A number of sites in London can claim “Marx Wuz Here”, and even one of them sells “Worker Bee” honey (100% of the proceeds go to the upkeep of the park).

As it was Social Anthropology that we were studying, I was never convinced Marx or the various iterations of Marxism took the symbolic into account. Labour and exploitation are a major part of the condition, but so is religion and other intangible beliefs. My favourite essay assignment during the Marxist section was, “What is the political significance of ghosts?” where I got to include pieces of Toni Morrison’s Beloved alongside anecdotes about the merging of communism with traditional spiritual beliefs in Vietnam.

But there is one thing about Marxism that I love in this modern day and age is… PUNS. If you were a sneaky sort that wanted me to join your worker’s uprising, you could fill your pamphlets with the worst Marxist dad-jokes and cat memes and I would be at the front of your parade. I can’t explain why, but no other historical genre of wit moves me as much as Marxist humour. There’s even some speculation that memes is getting “teens” into Marxism.

In the spirit of Media Anthropology, here’s a celebration of the different ways people have applied Internet Culture to Marxism. If you are political science educator, you must visit this site. All the comics feature competing philosophies and do a quick break down at the bottom. Marx makes frequent appearances in the ongoing “Dungeons and Dragons” series. Click on the image to be taken to the original comic. 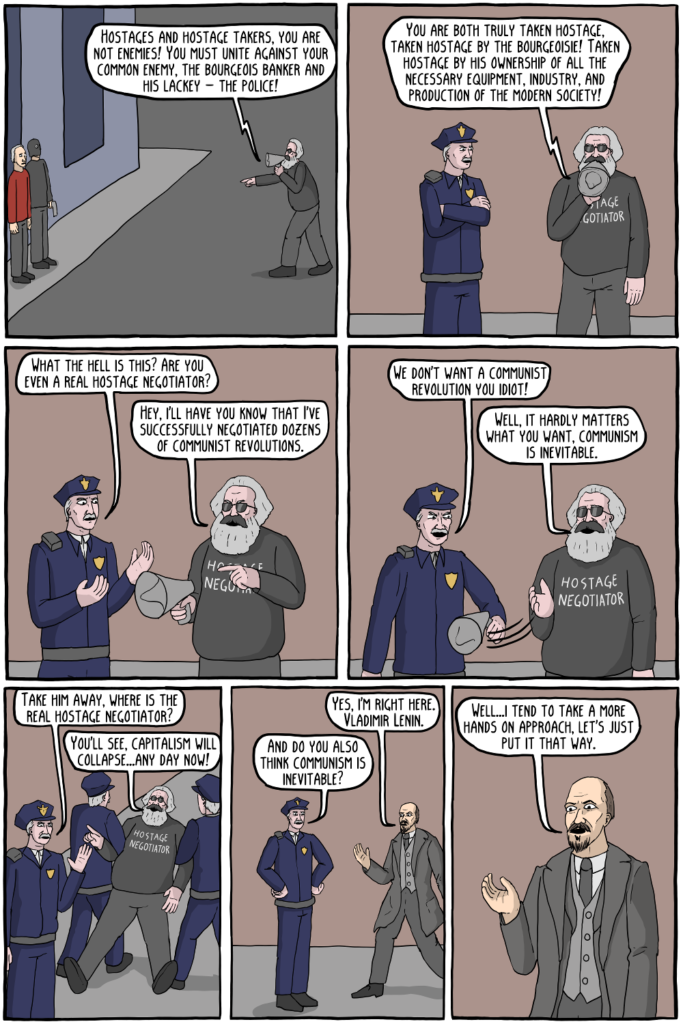 Education value for this one is quite high, but the animation gives you a nice break from thinking too hard. No list of humour on the Intertubes is complete without cats reading The Communist Manifesto. Also, can we note that the Karl Marx Bicentennial falls on a CATURDAY?! That Karl Marx resembles the modern American mall Santa is the ULTIMATE irony and I love it. That one may even purchase these designs printed on a t-shirt is another delicious layers! Here are a few variations on this theme, including one from our dear Existential Comics. (Full version of EC’s St Marx comic here)

“Marxist’s Apartment A Microcosm Of Why Marxism Doesn’t Work”, The Onion To conclude the list, a little something for the anti-Marxists. =)

I could fit so many more in this post, but it needs to end somewhere. Share your favourites, even the text-based ones, in the comments!

***If anyone knows who made Karl Marx Facepalm up at the top, let me know and I’ll update this post with proper credit.