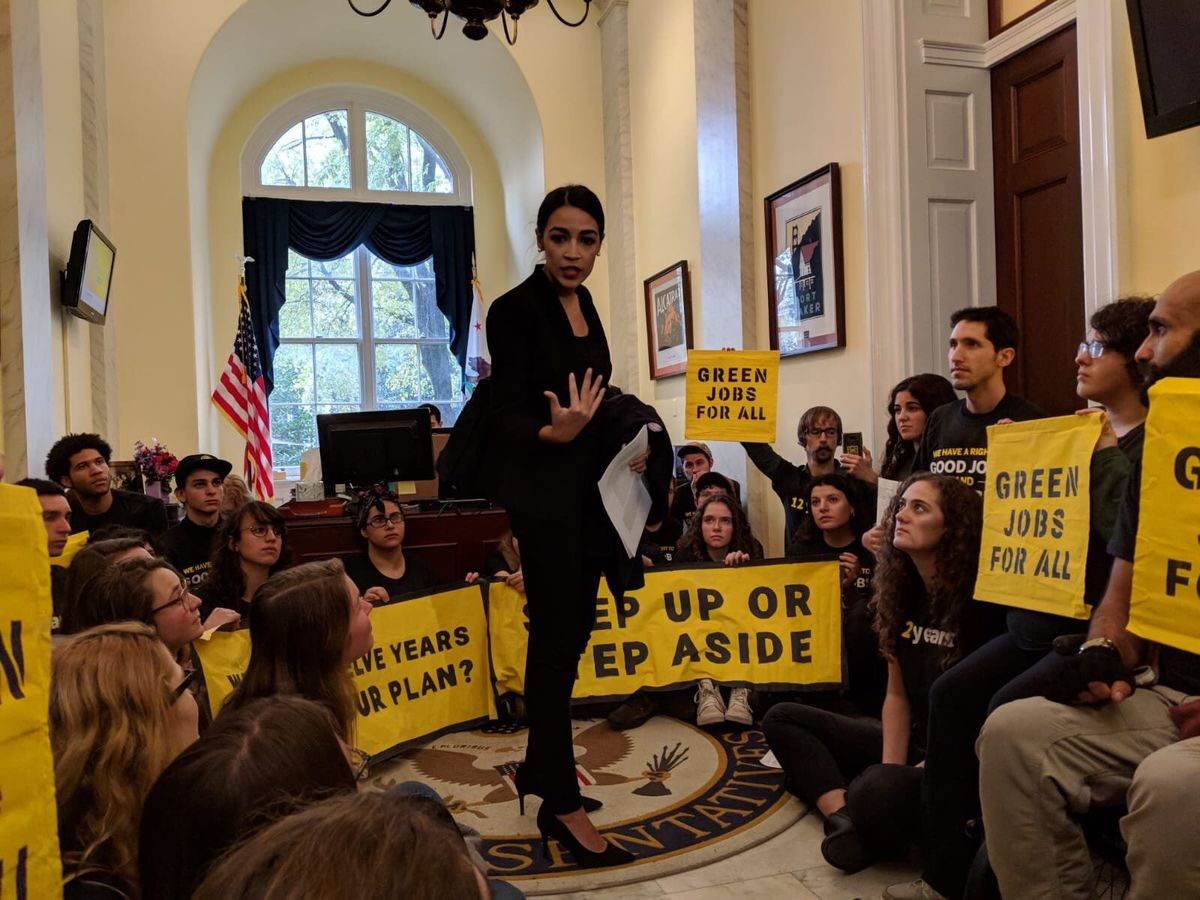 In the liminal space between the midterm elections (very much a blue wave) and the seating of a Democratically-controlled House, the political situation is remarkably fluid and indistinct, especially when it comes to the question of how far to the left the Democratic caucus will move. As Lemeiux has said, the attempt to unseat Nancy Pelosi is a profoundly stupid move by a group of conservative Democrats (who, not coincidentally, trend to the older, white, male demographic), which no progressive in or out of the House should support.

So what should progressives do in this moment? They should be doing what they have been doing already: pursuing an inside-outside strategy for exerting power within the Democratic caucus.

Last week, there was something of a stir when newly-elected Congresswoman Alexandria Ocasio-Cortez joined a protest by Sunrise Movement outside of Minority Leader Pelosi’s office. This got blown up by the Politicos and Axios of the world as a clash between these two figures, leading to a good deal of unnecessary pearl-clutching about a split within the party.

However, I would argue that this was a brilliant move on Ocasio-Cortez’s part. On a political level, she demonstrated that she would not be abandoning her ties to a fired-up activist base of young people now that she was in D.C, and ensured that the ongoing debate over climate change will have to include her voice. On a policy level, Ocasio-Cortez elevated the issue of the Green New Deal more than any white paper or press conference would have done, and pushed Pelosi to commit to giving the climate change committee a real budget, staff, and an explicit mandate to consider:

– as well as an incredibly ambitious plan to decarbonize the economy within ten years. I think this is excellent policy work, simultaneously putting the Green New Deal at the heart of policy conversations on the minimum wage, job guarantees, social justice, single-payer health care, and incomes policies, and making the Green New Deal a (highly popular) vehicle for the whole of the progressive agenda. Rather than creating a ten point plan for every issue, the Green New Deal becomes the central talking point of a disciplined message machine.

At the same time, Pelosi wasn’t in any way actually damaged by the protest – hence why she directed the Capitol Police to let the protesters stay and welcomed their activism on Twitter. At the end of the day, Pelosi was pressured to do something she was intending to do anyway, and the pressure from her left flank helps to justify her actions to her right flank. When the protest was over, there was good feeling all around: the activists were happy that they got a bunch of publicity and a bunch of high-profile endorsements for their push, Ocasio-Cortez was happy that Pelosi had signalled support for the select committee, and Pelosi was happy (for reasons I’ll get into later).

This is exactly how outside-inside strategies should work.

I would argue we see a similar process going on when it comes to the race for Speaker of the House. At a time when the right wing of the party is gunning for Pelosi, the right move for progressives is to back Pelosi in exchange for real power within the caucus. And lo and behold:

It wasn’t a coincidence that moments after Nancy Pelosi promised progressive House leaders more power in the next Congress, a host of liberal groups announced they were supporting her for speaker.

Rep. Pramila Jayapal, who is expected to co-chair the House Progressive Caucus next year, left a Thursday night meeting with Pelosi in the Capitol and proclaimed that her members would have more seats on powerful committees and more influence over legislation.

Once again we see a win-win scenario: the Progressive Caucus has laid down a warning to those conservative Democrats gunning for Pelosi that the balance of power has shifted, while helping to ensure that the next speaker isn’t someone to Pelosi’s right; Pelosi gets the support of one of the largest and fastest-growing groups within the Democratic Caucus, and in return progressives get “proportional representation” on the Appropriations, Ways and Means, Energy and Commerce, Financial Services, and Intelligence Committees (which means that Pelosi will have a less difficult job wrangling progressive legislation through those committees), and giving the House Democratic Policy and Communications Committee a budget and staff so that progressives can use the committee to push the caucus as a whole to the left.

Once again, this is how outside-inside strategy should work, using the Progressive Caucus’ links to groups like MoveOn and Indivisible to amplify the strength of their moves within the chamber.

The Fight’s Not Over Yet

All this being said, I want progressives to push harder on PAYGO and this supermajority on taxes:

“The group leaders also registered their concerns about “pay-go” rules with Pelosi. Under those rules, certain bills cannot be considered if they aren’t paid for. Progressives have long run on policy positions that would be expensive, from “Medicare for all” to free college tuition. Pelosi didn’t make any commitments, but she promised to bring those rules up for debate.”

While I’m generally of the belief that Pelosi has been one of the best progressive Speakers of all time, her proposals to re-enact PAYGO and establish a new supermajority to increase taxes represents a real weakness on her part. Not only have these moves never worked to protect her right flank at all (see the challenge to her speakership), but they actively work against the Democratic agenda on everything. Without PAYGO, Democrats in 2009-2010 could have made the ACA far more generous and more popular. Looking forwards, these proposals would make it more difficult to fight inequality by taxing the rich, more difficult to make the ACA more generous let alone pass single-payer, more difficult to fight climate change, more difficult to do everything that Democrats just got elected to do.

And this gets us to a larger point about how activists should engage with elected leaders: it is not enough, it is never enough, just to elect even really talented progressives, because no one is perfect on every issue, every time. There will always be a need to hold our electeds accountable to the broader agenda, whether it’s to push them on something their wrong on or to give them the visible support they need to push others.

There is no need to be afraid of constructive protest.