This is the grave of Frances Folsom Cleveland. 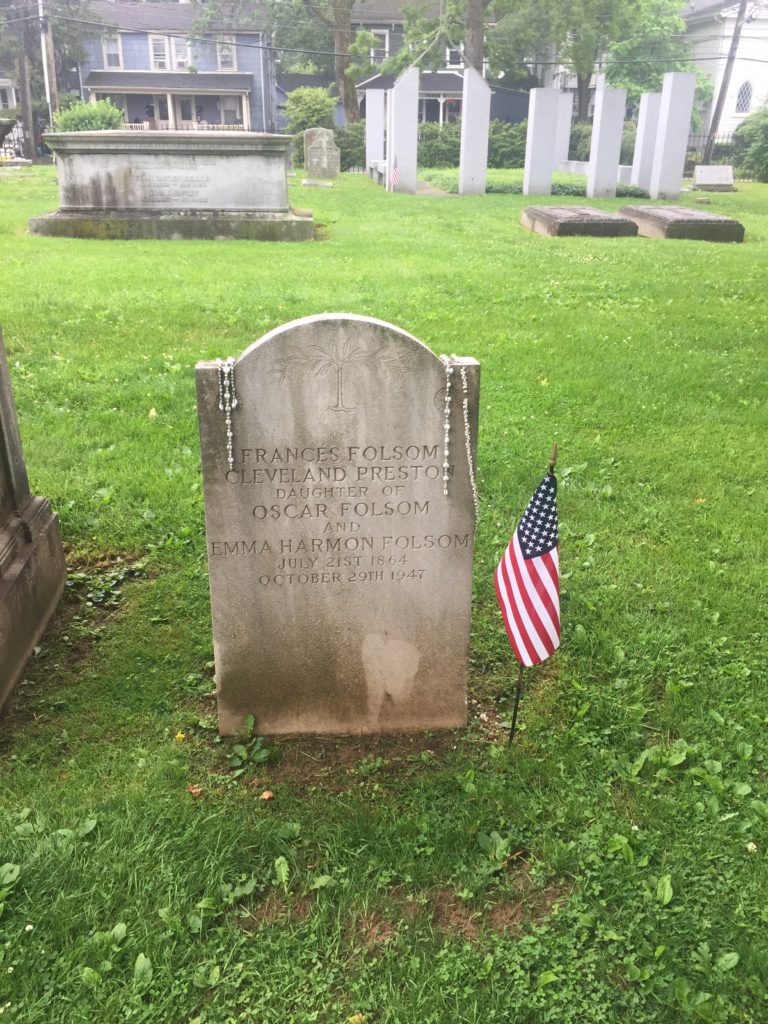 Born in 1864 in Buffalo, her father was a closen friend of Grover Cleveland. In fact, Cleveland knew her as a baby. He was very fond of her, bought her baby carriage, and spoiled her from an early age. She went to Wells College in Aurora, New York and while in college, Cleveland’s ardor for her transitioned from that of an uncle to that of a potential husband. They married while Cleveland was president, in 1886. He was 49. She was 21. Only John Tyler and his wife had a larger age difference, 30 years in that case. John Philip Sousa conducted the music for the wedding. The media didn’t seem to find this whole story as utterly creepy and disturbing as I do. Frances became an object of media fascination. As she dressed slightly more risque than the standard Victorian woman, occasionally showing some shoulder, the Women’s Christian Temperance Union spoke out against her immoral ways, which had no effect, though was ironic as she did not drink and Grover himself had already banned hard liquor from the White House. Being young and attractive, her image became stolen to be emblazoned on all sorts of consumer products. In fact, it was so out of control and there was so little protection for someone’s image that a member of Congress introduced the bill to protect the image of any woman from having it used without her permission. Being the Gilded Age, of course there it would only apply to women as they had to be protected from the public sphere and whatnot. In any case, the bill didn’t go anywhere.

Frances and Grover had five children. The oldest, Ruth, died at the age of 13 and is supposedly who the candy bar Baby Ruth, my awareness of which is only sparked when it shows up at Halloween, is named after. Their 4th child was Whittaker Chambers’ lawyer when Alger Hiss sued him for libel. So that’s something.

Grover Cleveland died in 1908 and Frances was still a pretty young woman. Five years later, she married an archaeology professor. She was actually in Europe when World War I began on a ski vacation and had to return to the U.S. via Genoa. But when she returned, she became a loud voice for American militarism, the crushing of radicalism (which maybe she learned from Grover), and other proto-fascist rumblings. She was also a leader in the anti-suffrage movement. We always think of suffrage as something only opposed by men, but that wasn’t true at all. There were many, many women who were opposed to suffrage, especially older women from conservative backgrounds. As far as I can tell, she lived a pretty quiet life after 1920 or so, heading some relief drives during the Great Depression, but that’s about all of note. She died in 1947 at the age of 83.

If you would like this series to continue visiting more conservative women more known today for their family members, you can donate to cover the required expenses here. Anne Gorsuch Burford, Reagan’s EPA director but known mostly today for her lovely, lovely son, is buried in Wheat Ridge, Colorado. Previous posts in this series are archived here.