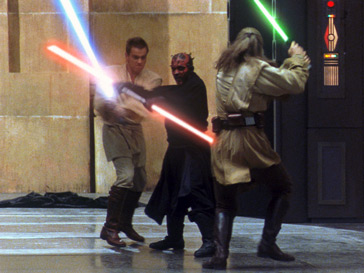 In honor of the latest entry in the Star Wars Cinematic Universe, I decided to take a closer look at what’s called, in these parts, the “Phantom Menace Effect.” I don’t know if Scott coined the term, but he certainly uses it a lot, and the argument boils down to this; Star Wars films tend to get high reviews when initially released, then crater in evaluation later in their life cycles.

The argument certainly makes anecdotal sense to me. It seemed like a lot of folks really liked Phantom Menace when initially released, then later came to revise those views in negative directions. The same can be said, anecdotally, of Attack of the Clones. Revenge of the Sith seemed a bit different to me; I have the sense that it’s increased a bit in esteem over the past few years. Given the rapturous reviews of Force Awakens I would have expected a similar trend (I always thought it was a touch overrated), but I figured that the critics got Rogue One about right.

To get a better sense, I decided to look at some numbers.  The table below includes all Rotten Tomato reviews of the prequels, Rogue One, and Force Awakens (The Last Jedi is too recent), divided between reviews that came out in the year of release and reviews that came later.  This includes “All Critics;” if you think that the Phantom Menace Effect only applies to Top Critics, feel free to generate the numbers yourself.  This is what I found:

As you can see, there doesn’t seem to be a lot of support for the proposition that Star Wars films are systematically over-rated in release, then re-evaluated later.  To be sure, there are lots of confounding elements to this; it doesn’t account for critics who change their mind, the kind of critics who review in the first year and those that review later are different in important ways, it doesn’t account for intensity of preference, and so forth.  But as for the main argument, it seems only to really apply to Phantom Menace (okay, I’ll grant that one), and maybe Revenge of the Sith (which I wouldn’t expect at all).

What does this mean for Last Jedi and Solo?  No idea.  Haven’t seen the latter, obviously, and the former is one of the more complicated entries in the canon (it includes some of the best and the worst sequences in the entire series).