Apart from some occasional stuff about Israeli weapons technology or nuclear doctrine, I try not to write about Israel-Palestine on the internet.  This keeps me sane.  But I think that there are some points that are too commonly overlooked (I’ve overlooked them myself) that need to be part of the conversation about Israel, Palestine, and BDS. Building on Abigail’s point, I think we need to grapple with the real difficulties associated with building an economic and political coalition designed to put pressure on Israel.

For the bulk of the latter half of the Cold War the Palestinians could count on a modicum of support from large, powerful non-Western countries, including primarily the USSR, India, and China.  India supported the Palestinians for anti-imperialist reasons; China supported them for the same reasons, and also to compete with India; the Soviets couldn’t give a fuck but because their allies did and the Chinese did, they pretended to care. All of this came together to make decent relations with Europe and the United States extremely important to Israel.  “Decent” is an important caveat here, because relations were never as good as you probably remember; the US and Israeli militaries were very prickly towards one another all the way down to the 1980s, and Israel was careful to source its military equipment from a number of different countries, as well as to build up its indigenous industries.

But while Israeli economic and especially social relations with the United States and Europe remain very important, its global structural position has changed.  China (which recognized Israel in 1992) is now Israel’s second largest export target, and will shortly be its largest source of imports.  There are heavy capital flows in both directions. Remember that these have to be added together: 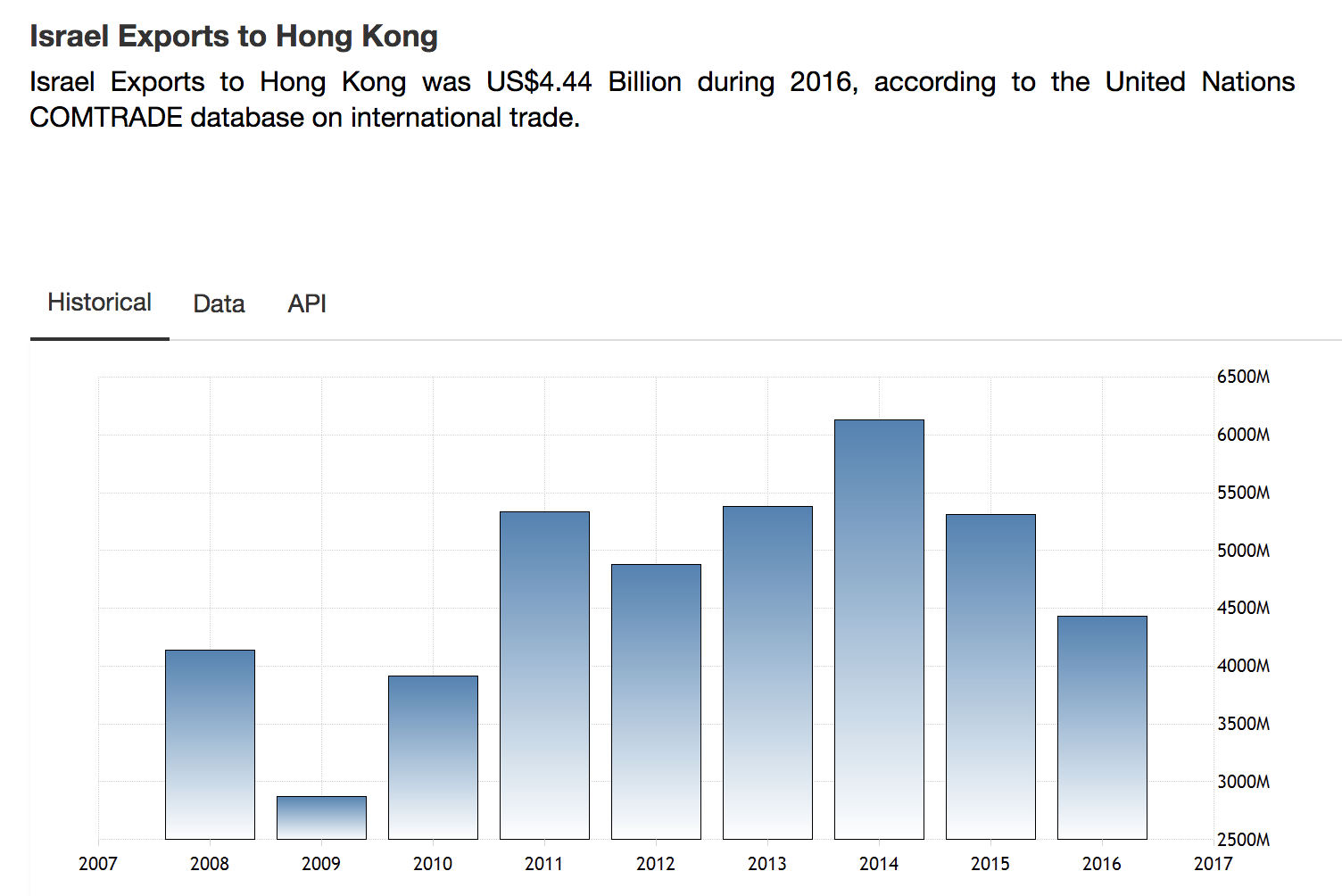 Israeli-Russian relations are complicated, but trade ties are growing, social ties are immense (in some ways more immense that US-Israeli ties), and Bibi and Putin seem to be personally fond of one another.  And with respect to India… well… And finally, not to put too fine a point on it, none of Russia, China or India give two shits about the violent repression of irredentist Islamic minority groups.  It’s a feature of Israeli policy, not a bug, especially as each of Beijing, Delhi, and Moscow have adopted the more noxious elements of War on Terror rhetoric. In short, both the ideological and the economic logics that gave the United States an immense amount of leverage over Israel (leverage that it never really used very successfully, but still) have relaxed in ways that make pressuring Israel much more difficult. Nor is it just the big three; Japan and South Korea are utterly indifferent to Israel’s treatment of Palestinians in anything but the weakest of rhetorical terms. Saudi Arabia has determined decisively that it strongly prefers a strong Israel to a strong Iran, a view that the Palestinians don’t share.

What I did not understand for a very long time is that Bibi had a pretty good handle on these trends.  I used to wonder why Bibi took such joy in alienating and provoking potential allies in Europe and the United States, and especially in making Israel a partisan issue in the US.  While there’s certainly a psychological aspect to it, I think that he also had a pretty good sense that Israel’s economy was dynamic enough, and its Asian partners flexible enough, that he could afford to take some risks with respect to the West.  And now it’s paid off handsomely, as he enjoys a strong ally in Washington as well as good relations with Moscow, Delhi, and Beijing.

The upshot is this: it is extremely unlikely that there will ever be sanctions regime against Israel to the extent of those faced by Iran and South Africa, because the coalitions that were able to create those sanctions happened in much different conditions.  Israel is not nearly as dependent on trade with Europe and the United States as it was two decades ago, both because the ideological conditions that held during the Cold War have dissipated, and because the balance of the global economy has shifted. For those interested in placing social and economic pressure on Israel, the center of gravity is increasingly *not* the United States and Europe.