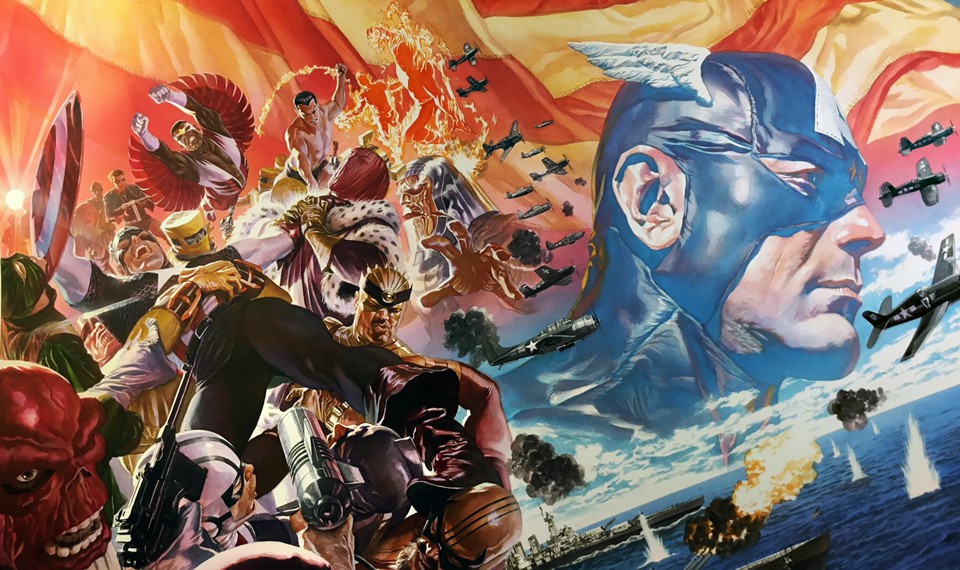 Although it’s been widely rumored for months, Marvel only lately announced that the next writer of Captain America will be Ta-Nehisi Coates. This is excellent news for a couple reasons: first, because after Nick Spencer’s disastrous run where Captain America became a Nazi, the book and the character badly need not so much a “Fresh Start” as a bold new direction – and Ta-Nehisi Coates is a writer who is not afraid of taking established characters in bold new directions, as readers of his continuing run on Black Panther can attest to. Second, more than almost any hero, Captain America is a character who is about political ideas, and as a top-flight political essayist, Coates is better suited than most comics writers to do just that.

Coates Has a Good Read on the Character

As I’ve noted before, people often misread Steve Rogers, either thinking of him as a political or cultural reactionary, following a Whiggish view of history in which the past is conservative and the future is an uninterrupted march of progress. That’s why it’s so good to see Coates writing that:

Those of you who’ve never read a Captain America comic book or seen him in the Marvel movies would be forgiven for thinking of Captain America as an unblinking mascot for American nationalism. In fact, the best thing about the story of Captain America is the implicit irony. Captain America begins as Steve Rogers—a man with the heart of a god and the body of a wimp. The heart and body are brought into alignment through the Super Soldier Serum, which transforms Rogers into a peak human physical specimen. Dubbed Captain America, Rogers becomes the personification of his country’s egalitarian ideals—an anatomical Horatio Alger who through sheer grit and the wonders of science rises to become a national hero.

Rogers’s transformation into Captain America is underwritten by the military. But, perhaps haunted by his own roots in powerlessness, he is a dissident just as likely to be feuding with his superiors in civilian and military governance as he is to be fighting with the supervillain Red Skull. Conspirators against him rank all the way up to the White House, causing Rogers to, at one point, reject the very title of Captain America. At the end of World War II, Captain America is frozen in ice and awakens in our time—and this, too, distances him from his country and its ideals. He is “a man out of time,” a walking emblem of greatest-generation propaganda brought to life in this splintered postmodern time. Thus, Captain America is not so much tied to America as it is, but to an America of the imagined past. In one famous scene, flattered by a treacherous general for his “loyalty,” Rogers—grasping the American flag—retorts, “I’m loyal to nothing, general … except the dream.”

This passage nicely brings together core aspects of Captain America as he’s existed for almost eighty years in the comics and as he’s been displayed to the world through the Marvel Cinematic Universe:  the origin story of a sickly youth turned shield-throwing sentinel of liberty, the stands against tyranny seen in Captain America: Winter Soldier or that time in the 70s where Cap brought down Nixon, and the idea of Captain America as a man out of time, reflecting on the present through the past. And these key elements are key to why Chris Evans’ portrayal of Steve Rogers in three films and on Twitter has been seized on so strongly by a younger generation of fans, and why it was such a misstep to go down Nick Spencer’s shallow contrarian path.

As a semi-professional Captain America and political history nerd, I’d like to see him get more explicit about Cap’s left-wing ideas – really interrogate what the imagined past was (more on this in a bit); I’d also like to explore the idea that Steve Rogers is not an old man in a young body (with all the values that are supposed to come with old age) but rather a man in his early 20s who time-travelled from the 40s to the present, just very slowly.

I think this is an excellent place to start writing about Captain America.

Ta-Nehisi Coates Is An Honest Wrestler With Ideas

Contrary to the backlash that accompanied the runaway success of Between the World and Me and We Were Eight Years in Power, I would argue that Coates is a very introspective and transparent writing about everything from learning French to the history of the Civil War to the politics of the Obama administration. This same quality has been very evident in his comics writing. Rather than luxuriating in comforting racial myth, Coates subjected Wakanda to the same kind of critical analysis seen in Ryan Coogler’s Black Panther, giving us two lesbian dissident Dora Milaje forming their own country within a country and Wakanda becoming a constitutional monarchy.

Now, Steve Rogers’ personal brand of New Deal era anti-fascist politics isn’t quite as natural a fit for Coates, which he readily admits:

I confess to having a conflicted history with this kind of proclamation—which is precisely why I am so excited to take on Captain America. I have my share of strong opinions about the world. But one reason that I chose the practice of opinion journalism—which is to say a mix of reporting and opinion—is because understanding how those opinions fit in with the perspectives of others has always been more interesting to me than repeatedly restating my own. Writing, for me, is about questions—not answers. And Captain America, the embodiment of a kind of Lincolnesque optimism, poses a direct question for me: Why would anyone believe in The Dream? What is exciting here is not some didactic act of putting my words in Captain America’s head, but attempting to put Captain America’s words in my head. What is exciting is the possibility of exploration, of avoiding the repetition of a voice I’ve tired of.

In recent years, Ta-Nehisi Coates has been a leading pessimist about American political history, especially when it comes to the idea of a usable past (rooted in the Declaration of Independence, the Constitution, the New Deal, and the Civil Rights Movement) that progressives can draw on to legitimate their agenda, or the broader idea of historical progress, that American institutions will become increasingly inclusive and as a result, long-standing inequalities and discriminations will fade.

Given that Steve Rogers has generally been portrayed as an idealist who embodies America as it could and should have been – an imagined past in two senses – a surface-level reading might suggest that Coates might have a problem writing this characterization. However, the word Lincolnesque is an important tell in the passage above. If you’ve followed Coates’ reading and writing about the Civil War for at least six years, you’ll know that he spent a good bit of time wrestling with Abraham Lincoln and the way that Lincoln thought about America and American ideals, about slavery and race, and Lincoln’s place in American history. (In late breaking news, Ta-Nehisi Coates was asked about Captain America at a SXSW talk and compared him to Obama, which is a massive hint as to how he’ll be approaching the subject.)

Based on that track record, I have every confidence that Coates can and will wrestle with Steve Rogers’ ideas and his place in the Marvel Universe.

Steve Rogers’ Ideas Need to Be Wrestled With

Given all this, I really want to see what Ta-Nehisi does with Steve Rogers’ particular brand of 1930s “premature anti-fascism.” Because when we’re talking about Captain America as a “man out of time” or representing an “imagined past,” he’s not coming to the present from just any time period or from any imagined past, but the imagined past of the 1930s and 1940s. And here is where we get to my comment at the beginning about the necessity of exploring the history of that period as a way of earnestly wrestling with Steve Roger’s ideas. All too often, when Marvel discusses Steve Rogers’ origin story, they present a depoliticized version of history. To the extent that the comics or movies use the symbolism of the era, they stick with the comparatively safe waters of WWII; Nazism is carefully hidden behind HYDRA (which is something that has had major implications later); and Rogers’ decision to volunteer is presented either as patriotism, a personal desire to share the sacrifice of rank-and-file soldiers, or a general opposition to totalitarianism.

Contrary to this sanitized view, the 1930s were an intensely political time, and Steve Rogers would have been exposed to many different political movements in his youth. Two years before Steve Rogers was transformed into Captain America, the German-American Bund packed out Madison Square Garden for a Nazi rally. (Hell, Captain America exists in no small part because Jack Kirby and Joe Simon wanted to draw attention to the fascist organizations that were openly organizing in the U.S and who had been exerting significant pressure to keep the U.S out of WWII.)

On the opposite end of the spectrum, the Popular Front was the high-water mark of leftism in mainstream politics, and New York City was its beating heart. A young Steve Rogers would have grown up seeing Popular Front rallies against evictions or for more relief for the poor, or collecting funds to support anti-fascist volunteers in the Spanish Civil War. At the same time, the New Deal that transformed New York City was not restricted to domestic politics; Roosevelt Roosevelt attempted to extend the New Deal internationally, first through his attempt to “quarantine” fascism and support the Allies through Lend-Lease, and then by framing WWII as a global struggle for Four Freedoms, with America standing as the Arsenal of Democracy.

At the same time, there were tremendous cross-currents: that same Roosevelt Administration maintained a segregated army, interned Nisei and Issei, turned back Jewish refugees, and only accepted the principle of non-discrimination in defense industries after A. Phillip Randolph and the Double V campaign threatened to march on Washington. The same progressive unions which called for interracial economic democracy saw thousands of their white members walking out in hate strikes. In order to gain mainstream appeal among white voters, the Popular Front tempered down their calls for racial equality in favor of a watered-down version of progressive nationalism that focused on equality between WASPs and newly white ethnics, making it more more palatable to whites.

In part because Ta-Nehisi Coates has been somewhat cool to the class-first politics of Bernie Sanders, who represents a particular tradition of American leftism that emerged out of Steve Rogers’ world, and in part because he’s been such a consistent voice reminding us how much of our patriotic historical narratives have excluded the experiences of people of color, I would love to see whether Coates’  deep dive on Steve Rogers’ America leads to any new thoughts about this tendency, its strengths as well as its weaknesses, its ambitions and dreams as well as its limitations.