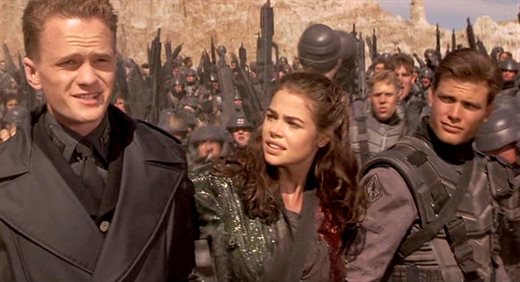 I’m so old that I remember a time (about a year ago or so) when pointing out that certain nationally prominent GOP figures were literally neo-Nazi sympathizers would have occasioned a round of Villager pearl clutching worthy of David Broder’s greatest hits.

Rep. Matt Gaetz (R-FL) invited notorious right-wing internet troll and Holocaust denier Charles Johnson to be his guest at President Trump’s State of the Union speech on Tuesday night, according to a Daily Beast report. . .

Johnson told the Daily Beast that he and Gaetz were introduced by another members of Congress, and that he “took Gaetz’s invitation” because “he’s into stuff on the issues that I care about.”

Gaetz is telling some obviously made up on the spot story about how this is all a big misunderstanding. Johnson you see was just some rando who wandered into Gaetz’s office right after Gaetz’s dad canceled on going to the SOTU, so Gaetz decided to help this nice youngish white man out with a free ticket.

Johnson was remains a well-connected figure in Republican politics. Last April, he discussed the Trump administration’s plans for a border wall on the phone with Interior Secretary Ryan Zinke. And in October, Rep. Dana Rohrabacher (R-CA) brought Johnson along to a meeting he had with Sen. Rand Paul (R-KY) about Wikileaks founder Julian Assange. Politico reported that during the early days of Trump’s presidency, he was occasionally given printed out stories from Johnson’s website to read.

At one point, Gaetz complained to Jones that he’s called a conspiracy theorist.

“We’re called conspiracy theorists because we see this cabal right in front of us. We’re able to aggregate these data points and show what was really going on,” Gaetz said to Jones, who once argued that the Sandy Hook massacre was a hoax..

These guys aren’t even pretending any more.

Meanwhile, back to our Johnson:

On Reddit, Johnson once argued that the number of Jews in the Holocaust was much less than the accepted number of six million. He also questioned the existence of gas chambers, writing, “I agree with David Cole about Auschwitz and the gas chambers not being real. Why were their swimming pools there if it was a death camp?”

Speaking of misty water-color memories, remember when this kind of thing was limited to poorly typed mimeographed pamphlets that would get anyone associated with them tossed out of any even vaguely respectable political association?

A friend of mine comments:

This is just one more example of Trump as the symptom. When you look at the most vociferous supporters of Trump, they’re guys like this: always male, almost always white, and espousing ideas that the bulk of society has rejected. But these guys are also almost always young, not old blowhards like Sessions, still clinging to a pre-60s worldview. Guys like Gaetz aren’t the old remnants. They’re the future. Specifically, they’re the future of the GOP. The party has tacitly been the party of rich, white guys (and, thus, often racism and other social constructs that society has been trying to move away from) for a century. Now it’s becoming the party of white guys and anti- everything else; in part because these guys have grown up in a society that has been (from their perspective) attacking their status for as long as they’ve been alive. They’re the walking example of the phrase “When all you’ve ever known is privilege, equality feels like oppression.”

At least some of that is generated by the pronounced decline in economic mobility in the past three decades and the nation’s peculiar preoccupation with “small towns” embodying the national character, but there are other things going on here, as well.