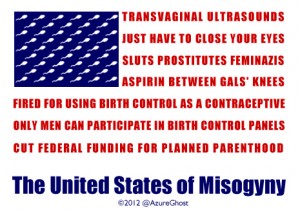 It’s so nice when the states can try out new frontiers in the Republican war on women for Congress. Oklahoma:

An Oklahoma state legislator, Rep. Justin Humphrey, is pushing a bill that would require a woman to get written permission from her sexual partner if she wants to have an abortion. The Supreme Court already struck down a very similar bill two decades ago, which means Humphrey’s bill would have almost no chance of holding up in court if it ever became law.

So why is Humphrey trying to pass it anyway? He explained his reasoning rather bluntly to Jordan Smith of the Intercept: Once a woman decides to be “irresponsible” by having sex, he said, her body is no longer entirely her own — because she will always be a potential “host” to a pregnancy:

Ultimately, [Humphrey] said, his intent was to let men have a say. “I believe one of the breakdowns in our society is that we have excluded the man out of all of these types of decisions,” he said. “I understand that they feel like that is their body,” he said of women. “I feel like it is a separate — what I call them is, is you’re a ‘host.’ And you know when you enter into a relationship you’re going to be that host and so, you know, if you pre-know that then take all precautions and don’t get pregnant,” he explained. “So that’s where I’m at. I’m like, hey, your body is your body and be responsible with it. But after you’re irresponsible then don’t claim, well, I can just go and do this with another body, when you’re the host and you invited that in.”

Humphrey told Smith that his original intent was to force fathers to pay child support from the moment of conception. That specific language was excised from the bill, he said.

But what remained was the disturbing extension of that logic: If a man and a woman have equal rights and responsibilities over the contents of the woman’s womb, then her womb — her body — is quite literally no longer her own.

And that is of course the point.

A proposed bill in the Tennessee General Assembly seeks to classify children born through artificial insemination as illegitimate children.

TCA 68-3-306 provides for the child to be considered the legitimate child of a husband and wife if the child is born through artificial insemination and with the consent of the husband.

“A child born to a married woman as a result of artificial insemination, with consent of the married woman’s husband, is deemed to be the legitimate child of the husband and wife.” (TCA 68-3-306)

However, the bill proposed by Weaver, with the Senate equivalent (SB 1153) proposed by Senator Joey Hensley (R-Hohenwald), would repeal that statute and label the child as illegitimate despite the couple being married and both consenting.

I guess I don’t spend enough time in Wingnutstan to understand why artificial insemination is a crime nearly equal to the genocide of tiny groups of cells growing inside a uterus. I’m sure the GOP will soon learn me.