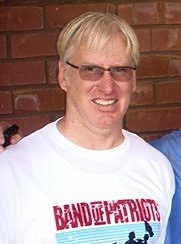 Jason Brian Dalton apparently randomly murdered six people and critically wounded two others in three shooting incidents in and around Kalamazoo, Michigan, last night (He seems to have squeezed his murders into the gaps in his schedule between collecting Uber fares).

This incident literally hit close to home for me, as my parents have lived in Kalamazoo for more than 40 years (I went to high school there), and two of the murders took place near their house.

Jason Brian Dalton appears to be a middle-aged white man, who seems likely to have committed these killings as a result of having a semi-automatic weapon at hand when he suffered some sort of psychotic break. So these murders would be of no interest or importance to the right wing media, since they constitute an unavoidable tragedy, as opposed to an Attack On Our Freedoms.

According to the social media scuttlebutt, the purported Facebook account of Dalton might list him as a Progressive employee at one time. The Facebook account whereby that Facebook profile appears certainly seems to fit the photos of Dalton released to the public in his booking photo, with the rotund Jason looking off into the distance in another Facebook photo, sitting on the couch with a woman who is presumably the one listed as his wife on Facebook, with two children. Another “Jason Dalton” Facebook photo shows a young boy at hunting practice with a colorful circular target, with the caption “next deer hunter.”

A different photo on the Dalton Facebook list of photos shows a man similar in appearance to Jason using a shielded snow blower with the caption that describes too much snow on February 28, 2009, which would certainly describe the abundance of snow in Kalamazoo that year, as reported by MTU.

The Gateway Pundit saw this, and immediately asked the question that would naturally spring to anyone’s mind:

Police arrested Jason Brian Dalton last night after killing six people in random shootings. Dalton described himself as a “Progressive” leftist on Facebook.
Do you think that will get any headlines?

Now it’s just possible that the phrase “a Progressive employee at one time,” is, given the phrasing and capitalization, referring to an employee of Progressive, the large insurance company. Still, it’s understandable that Jim Hoft, after experiencing the disappointment of not seeing an Arabic or at least Mexican-sounding name attached to the suspect, sought solace in the quoted report.

. . . Hoft’s post actually links to this report, which includes the following quote:

On his Facebook page, Dalton lists his employer as Progressive Insurance, but it’s not clear if he was still working there.

BTW in case you weren’t already familiar with the journalistic talents of Jim Hoft:

Today The Gateway Pundit is a leading right-of-center news website. The Gateway Pundit has 6-7 million visits (Stat Counter – Google Analytics). It is consistently ranked as one of the top political blogs in the nation. TGP has been cited by Sean Hannity, Rush Limbaugh, The Drudge Report, The Blaze, Mark Levin, FOX Nation and by several international news organizations.

Jim Hoft was awarded the Reed Irvine Accuracy in Media Award in 2013. Jim Hoft received the Breitbart Award for Excellence in Online Journalism from the Americans for Prosperity Foundation in May 2015.