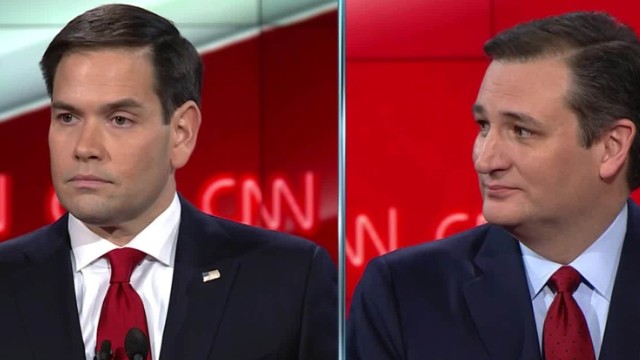 LGM commenter Karen24 linked yesterday to this story about a Super Pac associated with the American Freedom Party, that has been funding explicitly racist appeals in the form of robo-calls for Donald Trump. Here’s the full text of the call:

The American National Super PAC makes this call to support Donald Trump. I am William Johnson, a farmer and white nationalist.

I’ve read a lot of comments on LGM over the past few months arguing about what impact Rubio’s and Cruz’s Hispanic identity is having and will have among GOP primary voters. Many of these comments have asserted that Cruz reads as white rather than Hispanic with these voters, as opposed to Rubio, who, it is often claimed, “looks” Hispanic. Obviously this purported distinction isn’t cutting much ice with the good folks behind these robo-calls, who dismiss the very idea that either Cruz or Rubio are “really” white at all, since they’re both “Cuban.”

I would hope at this late date it isn’t necessary to point out, at least for the regular audience at this blog, that the whole concept of somebody being “really” white in some sort of biological sense is bogus, since people are “white” if a society labels them as such, period. In other words, there’s no other content to the concept than the arbitrary ascription of it to a subset of the population, the residents of which have constantly changing features over time.

So, are Cruz and Rubio “white” in 2016 America? This of course is one variation on the question of whether or rather which Hispanics are “white” in this country at this time. One thing that is perfectly clear, as Richard Nixon used to say, is that both Cruz and Rubio would be unambiguously “white” in Cuba. Ethnically speaking, Cubans are almost all either of Spanish descent, Afro-Caribbean descent, or both (the island’s pre-Columbian population was almost completely wiped out by disease in the 16th century).

People of Spanish descent in Cuba are paradigmatically white within that culture. That describes Rubio’s ethnic background. Cruz’s father’s father was from the Canary Islands (a part of Spain), while his mother was born in Delaware, and is of Irish and Italian heritage. That too adds up to unambiguous whiteness in Cuba, and indeed throughout Latin America.

In the US in 2016, things are still a little more ambiguous. As an official census category “Hispanic” is an ethnic group, rather than a racial categorization, so formally speaking there’s nothing contradictory about white Hispanics (consider the increasingly interesting demographics and epidemiology of the category white non-Hispanic Americans). But obviously there are people — how many is unclear — who consider “white” Hispanics to be imperfectly or not quite or not white at all. Hence: “Don’t vote for a Cuban.”

(BTW, formally speaking, the categories Hispanic and Latino are not synonymous. Latinos include anyone either from or descended from people from Latin America, while Hispanics include everyone from or descended from people from Spanish-speaking countries. This distinction makes Brazilians Latino but not Hispanic, and Spaniards Hispanic but not Latino).

So, how “white” are Cruz and Rubio? My guess, and that’s all it is, is that for the large majority of GOP voters, and the vast majority of Americans, Cruz is “white” (because a Cuban of Spanish descent is very close to “white” and a woman born in Delaware of Irish and Italian heritage is completely “white”), and Rubio is very close to “white,” but not quite all the way there (Hence the many comments even here at LGM that Cruz just “looks” white, in contrast to Rubio, who “looks” Hispanic.).

But there are still people out there who have more restrictive concepts of “whiteness” than this, which explains the robo-calls. How many is an interesting question.