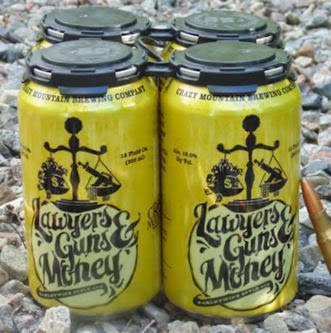 Awhile back, Erik discovered the existence of a new “barley wine” style beer (whatever that is) named Lawyers, Guns & Money. A request to the manufacturers to provide LGM’s key personnel with free gifts in the form of samples, or risk facing a potentially devastating trademark infringement suit, went nowhere, after someone who shall remain nameless printed out this carefully crafted demand letter on the back of a recycled piece of paper, the front of which turned out to be a letter dated May 31, 1990, addressed to Tim Raines and asking for his autograph.

A subsequent grant application to the Robert Wood Johnson foundation also failed to bear fruit. Last night, one member of the LGM team decided to take unilateral action. After setting up base camp at the Whole Foods Hot Bar at Pearl and 28th in Boulder (demographers have tentatively identified this spot as the single whitest place on Earth), this blogger set out with a party of Sherpas to a nearby liquor store, where according to unconfirmed reports the heretofore legendary beverage could be found.

After setting our pitons, we rappelled, guttered, and philosophized our way to the craft brew aisle. A final assault on the Colorado section proved successful, and we purchased (on sale no less: $10.99 for a four-pack of 12-oz. cans) the heretofore obscure object of desire.

Review: Very good, although perhaps a touch overpriced. 10% ABV is obviously a bonus.