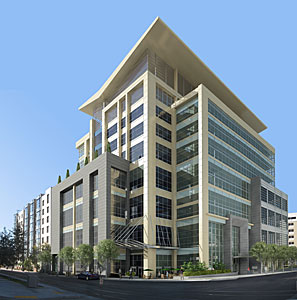 Thomas Jefferson is a big, although shrinking, ABA law school in San Diego, featuring horrible employment statistics (less than three in ten graduates have legal jobs nine months after graduation), terrible bar passage rates (over the past three years less than half of the school’s graduates who have taken the California bar have passed), and mind-boggling debt figures (the 2013 class took out an average of $180,000 in law school loans, which means its members had an average of around $215,000 in law school debt alone, not counting undergraduate debt, when their first loan payments became due in December).

A few years ago, this institution decided it would be a good thing to build a swank 305,000 square-foot eight-story building in downtown San Diego, at a cost of around $90,000,000. The project, which was completed in 2011, was beset by litigation over “alleged construction flaws and unpaid debts.”

The project has also been plagued by remarkably bad timing, as it opened just as the law school reform movement was generating the kind of major media coverage that led to a crash in applications to law schools generally, and to TJSL in particular. Applications to the school plummeted by more than 50% between 2010 and 2013, and even moving to a de facto open admissions policy (acceptance rates went from 45% five years ago to 80% last year) hasn’t stopped the student body from contracting.

Even as of July 2012, the school’s tax filings revealed an already-precarious financial situation, as revenue was failing to meet expenses, and the school’s assets consisted almost entirely of the new building and the land on which it sits (remarkably, the school, which is 45 years old, has literally no endowment). Meanwhile the school was carrying $92.5 million in bond liabilities, which in turn were requiring nearly $11 million per year in debt service. In addition, the building and land are apparently subject to what was as of two years ago a $33.4 million dollar mortgage.

This past December, the school’s new dean (his predecessor had been paid $529,000 in FY2012, apparently in recognition of his success in bringing the school to the brink of bankruptcy) announced staff layoffs and salary cuts, at the same time that the school’s bonds were being downgraded to junk status.

Now comes word that TJSL didn’t meet its payment obligations on its debt this summer, and that the school is frantically negotiating with its creditors to keep them from pulling the plug on this mess. The bondholders must now calculate whether it makes more sense to try to maintain the school as a going concern, or to get out while the getting is relatively not so bad, given the for the moment robust southern California real estate market.

A few months ago I did an analysis of 22 law school budgets, and discovered that almost all of them dedicated between 60% and 70% of their expenditures to employee (not just faculty) compensation. The major outlier was TJSL, which in FY2012 — that is, before the recent round of layoffs and salary cuts — dedicated only 39.5% of total expenditures on employee compensation. So it’s unclear how much more cutting of expenses the school can realistically do. Although TJSL has yet to officially report its 2014 class size, the admissions office told me that fall enrollment totaled 204 1Ls, to go along with around 60 spring matriculants (the school enrolled 440 1Ls three years ago). Given that the school is essentially 100% tuition-dependent, closing it down may well be the most prudent course of action from the perspective of its creditors.

But there’s another group of people whose interests are likely to be best served by the school closing: a large portion of its current students. Federal educational loans (and almost all postgraduate borrowing now consists of such loans) are almost never dischargeable, with one striking exception: if the school at which the debt was incurred ceases operations prior to the student’s graduation, and the student doesn’t subsequently complete his or her degree at another institution. In other words, the shuttering of TJSL would be a get out of debt jail free card for its students.