(This is a guest post from what should be a familiar face: Steven Attewell. He and I will resume our Game of Thrones podcast as soon as I get my shit together. I know, it does seem like I’ve been moving forever, you don’t need to remind me. In the meantime, enjoy!)

While I normally enjoy or at least tolerate the Washington Post’s Wonkblog on the grounds that at least they have more substantive policy discussions going on than the rest of the Post, it does seem lately that Dylan Matthews’ presence there is intended to fulfill some quota of center-right pseudo-contrarianism that’s hard-coded into the Post’s DNA. A recent provocation, this time on inequality, is a more quantitative gloss on why American poverty doesn’t matter:

What this is telling us is that in India and Brazil, the poorest people are among the poorest people in the entire world, whereas the richest people are either middle-class, globally speaking, as is the case in India, or are for-real rich, as is the case in Brazil. But if you’re in Russia and especially if you’re in the United States, the mere fact that you live there means that you are not (with some exceptions) poor in the global sense. The bottom fifth of Americans are still well above the middle of the world income distribution.

Matthews produces a number of charts from the chief economist of the World Bank that rank “ individuals’ position in their country’s income distribution” with “those individuals’ position in the world income distribution” to prove this. And indeed, Milanovic’s research does show that the purchasing-power-parity (i.e, equalizing how much it costs to buy the same goods and services across different countries) level of the poverty line is higher in the U.S and other rich countries than many incomes in other countries.

However, what Milanovic’s research doesn’t really talk about is how it’s more expensive to be poor in rich countries – not just because individual goods cost more, but because in richer countries you need a higher material standard of living to even be considered poor. Ownership of a car, for example, might not be part of the standard of living of the poor in rural India (where only 2.3% of households own four-wheel passenger vehicles), but it certainly is in the U.S, where 73% of low-income households own a car (in large part because 88% of Americans commute to work by car).

This is a big part of what is referred to as relative poverty – people do not judge (and are not judged) their social standing based on the absolute number of dollars they have or the specific package of goods those dollars can by, but rather by how their own standard of living stacks up to the standard of living of those around them. The key test of poverty shouldn’t be solely whether someone has enough dollars to keep body and soul together at an American price level, but whether they have the “modicum of economic welfare” needed to “live the life of a civilized being according to the standards prevailing in the society,” as T.H Marshall put it back in 1950.

The data on this relative poverty is less cheerful: as the same World Bank reports, “while the number of absolutely poor has fallen, the number of relatively poor has changed little since the 1990s, and is higher in 2008 than 1981.” Indeed, as economic development proceeds in poor (or formerly poor) countries, nations redefine both in official poverty lines and unofficial social conventions what counts as poor. This in turn changes the otherwise sunny picture of a world rapidly emerging from global poverty: the numbers of the relatively poor which totaled 2.5 billion in 1990 remained roughly flat at 2.7 billion in 2008: 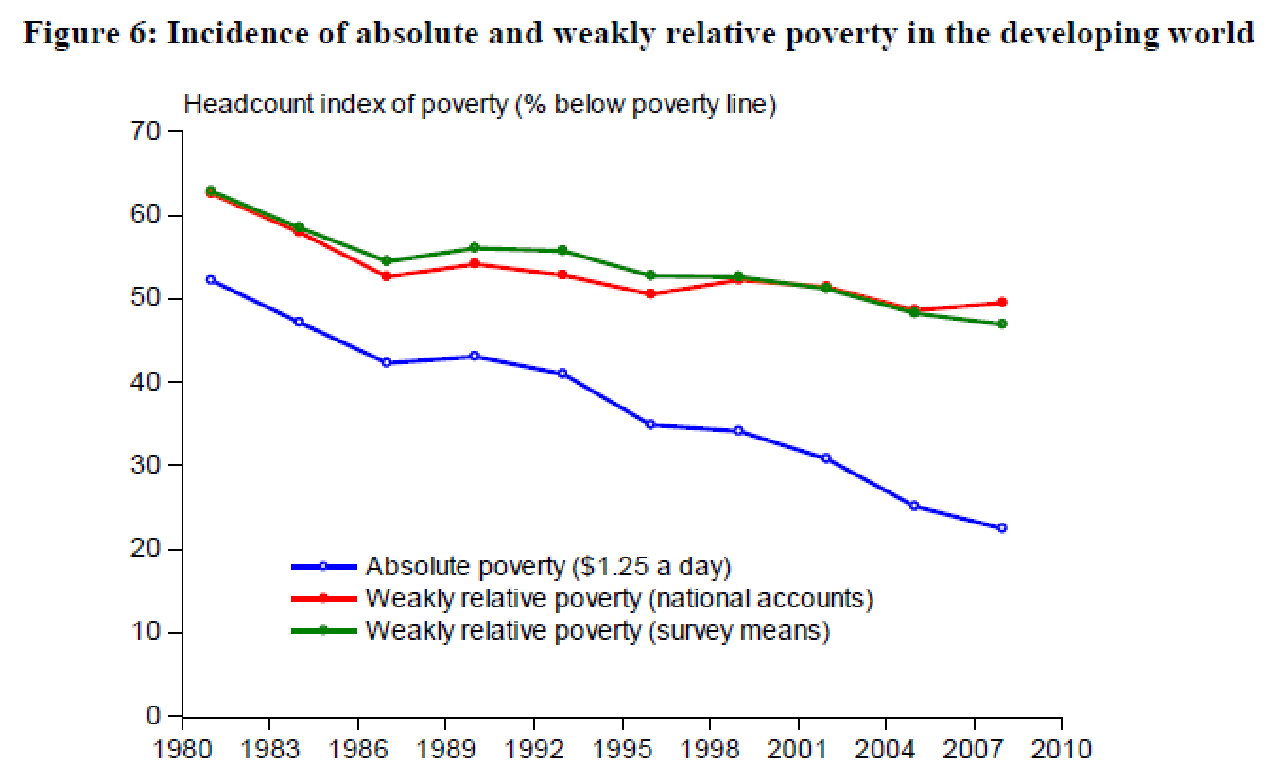 I think this gets to why Matthews’ piece (and its use of Milanovic’s research) strikes me as disingenuous in a way that makes it not so different from conservatives’ arguments that the poor have cellphones, therefore they aren’t really poor (even though in 2013 America cellphones are no longer luxury items but necessities for people to get and keep jobs). At the end of the day, the fact that the poor in America have a higher income than the poor in India doesn’t really help them on a day-to-day basis when they still have to live in America rather than India, not just paying American prices for goods and services, but trying to scrape up to a standard of living that won’t make them ashamed to be seen in public by their fellow Americans. And this standard is a constantly-moving target, a target that moves all the faster in rich societies where constant innovations in technology define what constitutes “the good life” on an almost-daily basis.

Matthews’ stance here isn’t that unusual; there is certainly a strain of putatively center-left people who argue that our moral concern and our activism should be directed only at the poorest of the poor, and that there is something immoral about engaging oneself in the struggles of anyone above that. We’ve seen this most recently in the responses of otherwise progressive people to the BART strike who argue that it’s wrong for BART workers to strike to preserve a middle-class standard of living when to do so would damage some poor people, but it goes back to putative liberals (Nicholas Kristof, par example) who argued that it was immoral for labor groups to oppose NAFTA and other free trade agreements which would benefit workers in poor countries whose standards of living were so low that sweatshops represent an improvement in their standard of living.

To this, I can only reply: Inequality matters all the way up and all the way down the spectrum. It doesn’t do any good to focus solely pushing up the very poorest in America while ignoring the merely poor and the almost poor, since this simply leaves people one rung up from the bottom but still in a precarious position, does nothing to prevent downward mobility and entrance into poverty from the rung immediately above the line of the “worthy” poor, and creates poverty traps by which public policies pull families out of the worst deprivation only to leave them stranded still outside of economic security. It doesn’t do much good to push for higher transfers to the poor instead of (rather than in addition to) attacking runaway inequality at the top of the income spectrum.

And internationally, it doesn’t help the absolute poor globally to downplay the existence of poverty here at home.