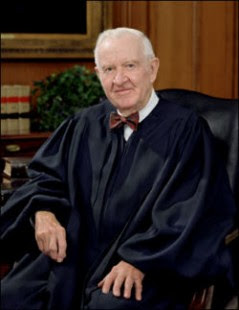 Given what bean correctly identifies as the complexity of today’s ruling in Baze v. Rees, I’ll have to leave discussion of the fractured holding until tomorrow. For now, let me discuss one interesting and unexpected development. For the first time since the nearly-retired Harry Blackmun, the Supreme Court now has a justice who believes the death penalty to be categorically unconstitutional under the Eighth Amendment. Justice Stevens:

Finally, given the real risk of error in this class of cases, the irrevocable nature of the consequences is of decisive importance to me. Whether or not any innocent defendants have actually been executed, abundant evidence accumulated in recent years has resulted in the exoneration of an unacceptable number of defendants found guilty of capital offenses. The risk of executing innocent defendants can be entirely eliminated by treating any penalty more severe than life imprisonment without the possibility of parole as constitutionally excessive.

In sum, just as Justice White ultimately based his conclusion in Furman on his extensive exposure to countless cases for which death is the authorized penalty, I have relied on my own experience in reaching the conclusion that the imposition of the death penalty represents “the pointless and needless extinction of life with only marginal contributions to any discernible social or public purposes. A penalty with such negligible returns to the State [is] patently excessive and cruel and unusual punishment violative of the Eighth Amendment.”

Stevens’s concurrence provoked a rejoinder from Scalia. I hate to admit it, but while I certainly think Stevens has the better of the policy argument, as a matter of constitutional law I think Scalia’s (while I would certainly not endorse every detail) is more persuasive. In particular, I agree that the explicit mention of “life” in the due process clauses of the 5th and 14th Amendments — while not dispositive — certainly puts the burden of proof on those claiming that the 8th Amendment forbids the death penalty in all cases. And questions such as whether the death penalty has a deterrent effect and what role retribution can play in criminal punishments, there’s enough reasonable disagreement to justify leaving the policy judgment to legislators, especially since nobody could argue with a straight face that there’s anything remotely resembling a national consensus against it. I’m open to arguments about the death penalty as applied, but I continue to think that the Marshall/Brennan position on the death penalty isn’t terribly convincing.

The other interesting twist, as many of you have already inferred, is that Stevens voted to uphold Kentucky’s execution regime, deferring to precedent. (In this, he differs from Blackmun — he may think that the death penalty experiment has failed, but remains willing to tinker with the machinery of death.)