Jurgen Rohwer and Mikhail Monakov wrote Stalin’s Ocean-Going Fleet in 2001, after the opening of Soviet archives had let considerable light onto Soviet Navy doctrinal and procurement decisions during the Stalin period. Rohwer is a German historian, and Monakov a Russian naval officer. The book concentrates on the period from 1935-1953, but inevitably compares that period to what came before and what came after. It’s a book that will appeal mainly to specialists, but that’s nevertheless chock full of yummy data and insight.

The Soviet Union emerged from the civil war with a small, obsolete fleet. While the Imperial Russian Navy had been a player, much of its strength had been destroyed at Tsushima, and new construction had not been sufficient to replace the losses before the beginning of the war (although the ships lost at Tsushima would of course have been obsolete by 1914 anyway). World War I served to weaken the reduced Russian Navy. Of the seven dreadnoughts built before or during the war, one exploded accidentally, one was scuttled by its crew to prevent seizure by the Germans, one was stolen by counter-revolutionaries and taken to Bizerta, and one burned down. Moreover, the three survivors were hopelessly obsolete by contemporary standards. The rest of the fleet wasn’t in much better shape.

Initial plans for reconstruction focused on the development of a force capable of executing a “jeune ecole” strategy; that is, an asymmetric force concentrating on sea denial and anti-commerce operations. Given the perilous state of Soviet industry, the weakness of the existing fleet, Russia’s geographic maritime limitations, and the profile of Russia’s most likely security threats, this was a sound assessment. However, there were other considerations. Although a revolutionary state, the Soviet Union proved just as susceptible to conceptions of prestige and power as any other state. The lesson of Mahan was that great powers had great fleets, and World War I had not sufficiently dissuaded the international community of this idea. Consequently, to be a great power the Soviet Union must possess a great fleet.

Plans were, to say the least, grandiose. The Soviet Union was cursed by bad maritime geography, in that the fleets protecting various parts of the USSR (Northern, Baltic, Black Sea, and Pacific) had great difficulty supporting one another in time of war. The solution was to build a fleet in each area that could establish local superiority. The 1937 construction plan called for the building of fourteen battleships and six battlecruisers by 1945. Eight would go to the Pacific, six to the Baltic, four to the Black Sea, and two to the Northern Fleet. Curiously, the battlefleets were to be complemented by only two aircraft carriers, one in the Pacific and one in the Northern. The irony of these plans is that, even in all of their unachievable grandiosity, they would have been insufficient to deliver victory on any front other than the Black Sea. By Soviet calculations, both the Imperial Japanese Navy and the Kriegsmarine would dwarf the Soviet contingents opposite them by 1945, and this assessment did not include an appreciation of the dominance that Japanese naval aviation would provide, much less an assessment of the German and Japanese geographic advantages.

The ship designs varied over time, with the battleships more or less resembling 60000 ton 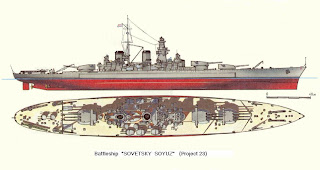 versions of the Italian Littorio class with 16″ guns, and the battlecruisers resembling the German Scharnhorsts, but with 12″ or 15″ guns. The aircraft carrier designs were considerably behind those of foreign contemporaries, being smaller, slower, and with a lower capacity than their American and Japanese counterparts. In addition to the capital ships a group of ten heavy cruisers was planned, displacing over 20000 tons and armed with 9 10″ guns. A substantial number of destroyers, submarines, and auxiliary vessels were also planned. In 1937 the Soviets approached the United States with a proposal to build Soviet battleships in American yards. Plans eventually emerged for a class of battleships displacing 45000 tons and armed with 10 16″ guns, but the US suspended cooperation after the Soviet invasion of Poland in fall 1939. Had plans gone forward, it’s likely that any construction would eventually have been incorporated in the USN.

The “big fleet” plans met resistance in the Navy, which resulted in the execution of a significant percentage of the naval officer corps. The Red Army also resisted the expansion of the Navy, as it would have placed a severe strain on Soviet industrial capacity during the mid to late 1930s. Nevertheless, Stalin felt that the prestige effect of having a large fleet was worth the expense. Indeed, he made the argument explicitly as early as 1933. The Soviet experience in the Spanish Civil War bolstered Stalin’s case, as he believed that intervention by the Kriegsmarine and the Royal Navy had given their respective governments a larger voice in matters on the peninsula. The focus on prestige also led to some odd claims in internal discussions, such as the argument that existing Soviet battleships (which, by objective measures, were some of the worst battleships in the world) outclassed all but a few of their foreign contemporaries.

A combination of the danger of war and the serious limitations of the Soviet industrial base forced a curtailment of naval procurement in the late 1930s. Two battleships were laid down, but never completed, along with a host of smaller craft. Interestingly enough, the battleship ambitions survived the end of the war. Although the new construction had been destroyed, new plans for battleships and battlecruisers were drawn up, including a 1950 plan for a class of 70000 ton behemoths. Two battlecruisers (35000 tons, 9×12″ guns) were actually laid down in 1951. In spite of the apparent dominance of the aircraft carrier during World War II, Stalin remained interested in naval aviation only in a supporting role. To his mild credit, this was defensible in the context of the Black Sea or the Baltic, although it would have proved disastrous in the Pacific or the North Sea. The response of the naval staff to these demands was polite acquiescence, but the battlecruiser and battleship projects were cancelled shortly after Stalin’s death.

Rohwer and Monakov aren’t going to win any awards for prose styling, and they don’t make much of an effort to reach an audience that isn’t already abnormally intersted in Soviet interwar naval policy. Nevertheless, there’s a lot of data here, and in particular a lot that would be of interest to scholars of statebuilding and international society. What we have here is a country which understood itself to be an international pariah, and that suffered from the most severe economic and geographic roadblocks to maritime power. Nevertheless, whether because or in spite of the Soviet disdain for international society, the USSR embarked on an amazingly expensive effort to match foreign navies on a metric of international prestige that was deeply tied to conceptions of imperial, colonial power. Naval professionals understood the roadblocks (both before 1933 and after 1953) and adjusted their plans accordingly, but the civilian leadership had different priorities. It’s tempting and at least partially true to chalk the programs up to Stalin, but nevertheless interesting that socially driven conceptions of prestige loomed so large in his decision-making, or alternatively that they structured his understanding of the meaning of Soviet national security. I suspect there are also some lessons to be learned regarding recent Russian proposals to build half a dozen carrier battle groups and deploy them in the Pacific and with the North Fleet.