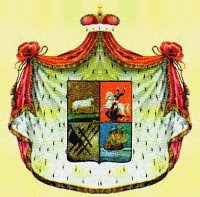 In 1184, the Lord High Steward of Georgia was given, for his troubles and services, a small duchy on the Black Sea. Duke Vardan II Dadiani ruled Mingrelia, an area of about 3500 square kilometers, for 29 years before passing it on to his son. For the next seven hundred years, Vardan’s descendants would, with one or two exceptions, rule Mingrelia. During this time Mingrelia (and the rest of Georgia) endured occupation by the Mongols, the Ottomans, the Persians, and eventually the Russians. In 1671, the French adventurer Jean Chardin visited Mingrelia (then a Christian island among Persian and Turkish dominated lands), and described a wretched peasantry ruled over by an arrogant nobility.

In the 18th century Russia began to pursue control over Georgia in earnest. Georgia was incorporated into the Russian Empire in 1801, but Mingrelia and a few other small states held out until 1803. The Dadiani continued to rule Mingrelia as hereditary princes until 1867, when they abdicated in return for various favors associated with Russian nobility. Many of the Dadiani served in the Russian Army, one losing his legs in the Russo-Japanese War.

In 1899, the wretched Mingrelian peasantry produced a boy named Lavrentiy Beria. In March 1917, young Beria joined the Bolsheviks, just as the wretched peasantry (and wretched workers, and wretched everyone else) decided to settle the score with the arrogant Imperial Russian nobility. The head of House Dadiani at the time was Nicholas II Dadiani, Gentlemen of the Bedchamber to the Emperor Nicholas II of Russia. Prince Nicholas II, like Emperor Nicholas II, did not prosper after the Revolution; he survived his Emperor by eight months, dying in a Bolshevik prison hospital in March 1919. It is unlikely that Beria, then working in Azerbaijian, ever met Prince Nicholas II, but he made his career through leading the repression of the Georgian national uprising of 1924, which included Mingrelia.

Prince Nicholas II’s sister, Salomea, escaped to France with her husband and her four children. Although the husband shot himself in 1924, Salomea survived until 1961. One of her sons joined the French Resistance, and was murdered by the Gestapo in 1944. He received a posthumous Order of the Great Patriotic War of the USSR. Alexander, her second son, survived the war and had a son who eventually relocated to the United States. Prince Sergei Valerianovich Obolensky was born in New Haven, CT in 1956, and is, as far as I can tell, the heir to the Duchy of Mingrelia.

Since the fall of the Soviet Union, Georgia has regained its independence. Several quasi-states within Georgia have aspirations towards independence, including Mingrelia, whose people are linguistically distinct from other Georgians. However, these aspirations have never reached the level of those in Abkhazia or other breakaway regions, and in any case it seems unlikely that the Mingrelians would seek out an heir whose family gave up the throne 140 years ago. As such, prospects for a return to the throne appear extremely grim.

Trivia: What deposed monarch has made intermarriage one of the central planks of his restoration campaign platform?