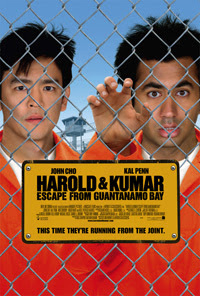 I’ll be the first to admit that I’m not exactly hip to the latest in stoner film culture, but would someone please tell me I’m the last person to actually hear about this? Maybe I missed Cheech and Chong Invade Grenada, but this is pretty goddamned tacky. [UPDATE . . . . well, OK, this is why I maybe shouldn’t write about movies . . . Having watching the trailer, I’ll cheerfully take my licks for this. Meantime . . . ]

Meantime, via Steve Perry, we learn that the MPAA has rejected poster artwork for two documentary films that actually deal with Guantanamo:

The MPAA has rejected the one-sheet for Alex Gibney’s documentary “Taxi to the Dark Side,” which traces the pattern of torture practice from Afghanistan’s Bagram prison to Abu Ghraib to Guantanamo Bay.ThinkFilm opens the pic, which is on the Oscar shortlist of 15 docs, on Jan. 11.The image in question is a news photo of two U.S. soldiers walking away from the camera with a hooded detainee between them.

An MPAA spokesman said: “We treat all films the same. Ads will be seen by all audiences, including children. If the advertising is not suitable for all audiences it will not be approved by the advertising administration.”According to ThinkFilm distribution prexy Mark Urman, the reason given by the Motion Picture Assn. of America for rejecting the poster is the image of the hood, which the MPAA deemed unacceptable in the context of such horror films as “Saw” and “Hostel.” “To think that this is not apples and oranges is outrageous,” he said. “The change renders the art illogical, without any power or meaning.”

The MPAA also rejected the one-sheet for Roadside Attractions’ 2006 film “The Road to Guantanamo,” which featured a hooded prisoner hanging from his handcuffed wrists. At the time, according to Howard Cohen, co-president of Roadside Attractions, the reason given was that the burlap bag over the prisoner’s head depicted torture, which was not appropriate for children to see.

I’ve actually seen The Road to Guantanamo, and it’s a remarkable film that deserves a wider audience. But I, too, would hate to see children scared away by the film’s poster, so I’ve taken a few moments to adapt it with the MPAA’s sensitivities in mind. 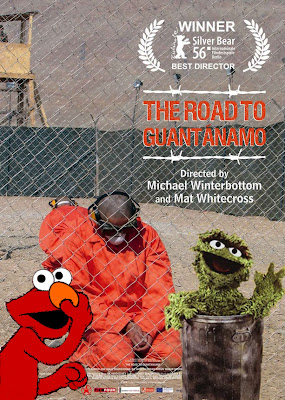