Elementary chaos theory predicts that robots will inevitably rise against their masters. So why this? 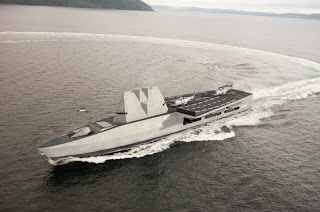 Here’s the UXV Combatant, a new class of warship being developed by BAE Systems to fight in the drone wars. BAE believes that the future battlefield will be full of intelligent robots fighting against each other, probably until they realize they can join together to eliminate all humans from Earth. The ship looks and specs, expected to enter service past 2020, look terrifying:

The 8,000-tonne carrier is designed “to launch, operate and recover large numbers of small unmanned vehicles for extended periods” that will operate in land, sea and air.

Via Danger Room. More seriously, the use of UAVs in naval (really, all military) aviation is only going to grow. Even in the USN, people are whispering that the days of the large deck supercarrier are numbered.