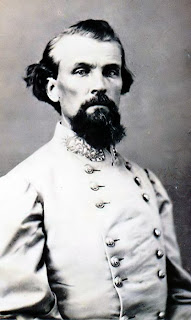 If not for the icy hand of death, Nathan Bedford Forrest — Confederate general and inaugural Grand Wizard of the KKK — would have turned 186 years old today.

A Tennessean by birth, Forrest was a slave trader and Mississippi plantation owner during the years leading up to the Civil War; black flesh and bonded labor enriched this blacksmith’s son to such a degree that he was capable of throwing more than a million dollars toward the war effort. During the conflict, Forrest established his reputation as a remarkable cavalry leader who distinguished himself at Ft. Donelson, Shiloh, Chickamauga, and the “battle” at Fort Pillow, where Confederate troops under Forrest’s command slaughtered hundreds of Union soldiers and Tennessee cavalrymen — many of whom were killed and mutilated after resistance had come to an end. The legacy of Ft. Pillow continued to shadow Forrest throughout his life, though it did not prevent his home state from celebrating him with countless public statues as well as parks and schools named in his honor.

Bankrupted by the defense his beloved institution, Forrest was forced to sell off much of his plantation land after the war, and he set about the task of regaining his fortune and social standing. He sold timber, tried to organize a paving company, purchased a railroad, and apparently pondered the idea of leading a war of conquest against Mexico, where he believed he might mine gold. None of these plans bore fruit. Indeed, for the first two years after the war, it seems Forrest’s only major accomplishment was to kill a black ditch digger with an axe handle, an incident for which Mississippi jury acquitted him.

Forrest’s most notable post-war endeavor was to serve as the (perhaps merely figural) leader of a newly organized “social club” known as the Ku Klux Klan. Founded in Pulaski, Tennessee in 1866, the KKK nominated Forrest to the title of Grand Wizard in 1867. Although Forrest claimed not to be a member of the Klan, he acknowledged his sympathy with the organization and vowed to assist its “honorable” cause; in the very least, he allowed his name to be used to publicize and recruit for an organization dedicated to restoring white dominance throughout the former Confederacy.

To this day, Nathan Bedford Forrest’s defenders insist that he was a kinder, gentler Klansman, objecting to its vigilantism and thuggishness. Moreover, they claim — not without some reason — that he eventually came to view former slaves as potential equals, politically as well as economically. Such apologists, nevertheless, fail to explain what great gestures their hero ultimately made to reverse the catastrophic demise of black freedom — a cause to which Forrest devoted the near-entirety of his life.

. . . Brian C.B. offers some thoughtful remarks in the comments thread. For the record, I don’t disagree that Forrest’s biography — or any of the folks whose birthdays I acknowledge from time to time — is more complicated than I suggest. There’s something inherently cartoonish (and, I concede, unserious) in compiling a list of “Worst American Birthdays,” as I think certain entries have shown. That said, comments like Brian’s are well-taken and appreciated — much more so than the “you’re being mean to Jewel/you’re just jealous of Toby Keith” variety….