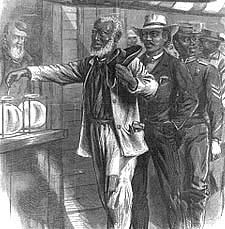 Maybe the emphasis on getting more people to vote has dumbed-down our democracy by pushing participation onto people uninterested in such things. Maybe our society would be healthier if politicians aimed higher than the lowest common denominator. Maybe the opinions of people who don’t know the first thing about how our system works aren’t the folks who should be driving our politics, just as people who don’t know how to drive shouldn’t have a driver’s license.

Instead of making it easier to vote, maybe we should be making it harder. Why not test people about the basic functions of government? Immigrants have to pass a test to vote; why not all citizens?

A voting test would point the arrow of civic engagement up, instead of down, sending the signal that becoming an informed citizen is a valued accomplishment. And if that’s not a good enough reason, maybe this is: If you threaten to take the vote away from the certifiably uninformed, voter turnout will almost certainly get a boost.

As luck would have it, Jonah is going to be in Juneau tomorrow. I suspect I’ll find him at one of the two delicious fudge shops located conveniently along the dock. Perhaps he and I can have a stimulating conversation about the merits and demerits of universal suffrage. Perhaps I’ll have the opportunity to remind the Doughy One that instituting “a voting test” would require amending the 1965 Voting Rights Act (unless, of course, Goldberg wants to have fifty different “voting tests”). And since Goldberg clearly understands that a proposal like that would generate a massive “boost” in voter turnout, perhaps he can think of a few Republican friends of his who might take his asinine, contrarian notions seriously enough to propose them in Congress or on the presidential campaign trail.

In fact, here’s a model. I’m pretty sure it’s in the public domain, so borrow as much as you want!

. . . more from Tom Hilton, who always manages to find these things several hours before I do….