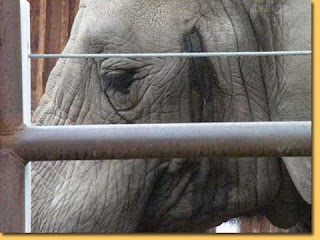 Not to put too fine a point to it, but zoos are depressing, y’all.

Alaska’s only elephant had to be hoisted to her feet for the second time in a week, renewing concerns about the health of the 7,500-pound animal.

The incidents have renewed calls by animal advocates to relocate Maggie to a warmer locale where she can exercise in a more natural environment and be around other elephants. Critics said Maggie’s lack of exercise might be causing degenerative muscle problems or arthritis.

I can’t imagine too many places less suited for a captive elephant than Anchorage, Alaska. Because of the frigid winter climate — which resembles nothing of this African elephant’s natural haibtat — Maggie is stored in a concrete “elephant house” during the coldest months of the year, then brought out to amuse the masses during the summer. Unable to walk and forage, Maggie has been trained to walk on a giant treadmill, which she does about as reluctantly as one might imagine. The animal is overweight, suffers from chronic dry skin, and has not seen or heard another elephant since 1997, when the zoo’s other captive — Annabelle — died prematurely of foot rot. Still, the Alaska Zoo refuses to relocate Maggie to either of the two elephant sanctuaries in the US.

I’ve said it before, and I’ll say it again. My state is a national embarrassment.