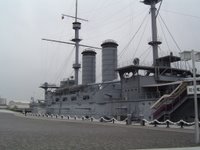 In 1894, the Imperial Japanese Navy annihilated a Chinese Fleet at the Battle of Yalu. The victory helped establish Japanese power on mainland Asia, and served as an announcement to the Western Powers that Japan could be an important player in the brawl over the decaying corpse of Qing China. The victory also highlighted some deficiencies in the Imperial Japanese Navy. Established in 1869, during the Meiji Restoration, the IJN had modelled itself around British and French tactics and doctrine, and had purchased ships from several European countries. The IJN initially preferred the French model, concentrating on small, fast cruisers and torpedo boats. At Yalu, however, two Chinese battleships proved almost unsinkable, pushing the Japanese back towards the British model. Accordingly, the IJN ordered half a dozen battleships from British yards, and accompanied this purchase with that of a large number of other, smaller warships. By 1903, Japan possessed an impressive, competent battlefleet.

The last ship delivered to Japan before 1904 was Mikasa, a 15000 ton battleship based on the British Majestic class. Mikasa carried 4 12″ guns in two dual turrets, 14 6″ guns, and could make 18 knots. Before Dreadnought, it was believed that battleships ought to have a mix of heavy and light guns, as the rate of fire of the smaller guns, especially at short ranges, would make up for their reduced weight. The standard “pre-dreadnought” battleship carried 4 guns in two dual turrets, accompanied some number of smaller weapons. Mikasa’s experience in the Russo-Japanese War would demonstrate the inadequacy of this model. 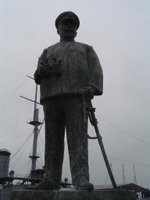 Russia, Germany, and France had worked together in 1895 to force Japan to cede much of its gains from the 1894 Sino-Japanese War back to China and to an independent Korea. Subsequently, Russia occupied most of the territory that Japan had given up. This caused friction between Japan and Russia, and led to the deployment of a powerful Russian naval squadron at Port Arthur. In February 1904 tensions boiled over, and Japan launched what amounted to a surprise attack against the Russian fleet on February 6. The attack succeeded in damaging several Russian ships, but left much of the Russian force intact. Japanese naval activity for the next several months concentrated on preventing the escape of the Russian fleet. Minefields took their toll on both sides, the Russians losing one and the Japanese two battleships.

In 1904, countries like Japan simply did not win wars against countries like Russia. Accordingly, the Tsar dispatched his Baltic Fleet to the Far East with orders to combine with surviving Russian ships at Vladivostok and destroy the IJN. The Russian fleet left on October 15, 1904. Along the way the fleet mistook a group of British fishing boats off Denmark for Japanese torpedo boats, and almost started a war with the United Kingdom. Although the new Russian fleet was not as technically advanced as the IJN, it included eight battleships, double the size of the Japanese fleet.

Admiral Togo decided to intercept the Russian fleet in the Tsushima Straits, between 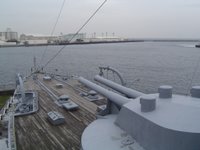 Korea and Japan. The Russian intention was to push through the Straits as quickly as possible in an effort to reach Vladivostok and refit. The Russian ships had been slowed by their long transit, while the Japanese ships were repaired and fresh. The Japanese intercepted the Russian fleet on May 27, 1905, and used its superior speed on a parallel courseto pull ahead of the Russian ships. Having opened up sufficient distance, the Japanese fleet made a hard turn to port and crossed in front of the Russians. This later became known as the “Togo Turn”. Within an hour, most of the Russian fleet was ablaze and sinking. Mikasa, being the first ship in the Japanese line, was badly damaged, but managed to make it back to port without difficulty. The engagement was conducted almost entirely with the long range main batteries of both sides, lending credence to the “all-big gun” theories of Jackie Fisher. Isoruku Yamamoto, a young officer on the cruiser Nisshin, lost two fingers in the battle.

Four of the five largest Russian battleships sank on the first day. The last, along 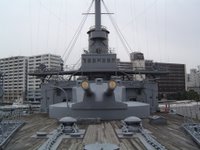 with the most of the rest of the Russian fleet, was rounded up over the next day. The Japanese sank 21 Russian ships and captured seven, including four battleships. Tsushima was one of the last naval engagement in which a significant portion of the defeated fleet surrendered. From 1905 on, most defeated ships would scuttle themselves rather than strike colors and be boarded. The captured Russian ships were incorporated into the IJN in various capacities, with several serving until the 1920s. Tsushima is the 20th century equivalent of Trafalgar, a battle of annihilation in which one fleet is almost completely destroyed with little or no damage to the other.

The Tsar was successfully disuaded from dispatching the Black Sea Fleet to the Far East, and a peace was concluded with President Roosevelt serving as broker. Japan had to give up many of its territorial gains, but assumed control of Port Arthur and began to annex Korea. In September 1905 Mikasa exploded and sank in port. Salvaged and returned to service, her responsibilities were steadily reduced until she was decommissioned in 1923. Nearly sunk in the Great Kanto Earthquake, Mikasa was scheduled for scrapping under the terms of the Washington Naval Treaty. At Japanese request, however, Britain and the United States approved the retention of Mikasa as a museum ship, and in 1925 she was converted into a memorial.

Mikasa was damaged by US bombing in World War II, and following the Japanese surrender was disarmed by US occupation forces. A movement for restoration began in the mid-1950s, and gained the support of Admiral Chester Nimitz and other prominent Americans. It’s possible that the Americans saw Mikasa as an acceptable symbol of Japanese nationalism, all the more so because of her service against Russia. It’s also possible that they were genuinely interested in the survival of Mikasa as a historical artifact. Using many of the fittings from the Chilean battleship Almirante Latorre, Mikasa was restored and reopened as a memorial in 1962. She is now one of three World Memorial Ships, along with HMS Trafalgar and USS Constitution.