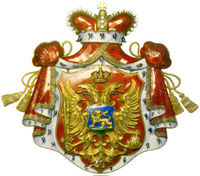 By Robert Farley
|
In monarchs , montenegro , yugoslavia
|
On August 5, 2007
Montenegro emerged as a territorial unit around the 14th century. Although the Ottoman Turks conquered part of modern Montenegro, and Venice exerted considerable influence over the rest, the antecedents of the Montenegron state enjoyed at least nominal independence for most of the early modern era. In the early sixteenth century, an archbishop of the Serbian […]
Continue Reading