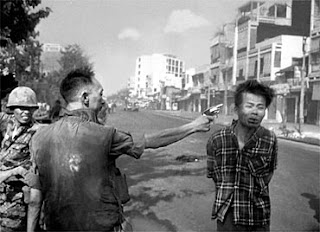 By davenoon
|
In Eddie Adams , Iraq , Jonah Goldberg , Vietnam
|
On February 1, 2007
It’s the 39th anniversary of this scene, made famous in a photo by Eddie Adams. The image depicts the summary execution of Nguyen Van Lan — an NLF fighter — by Lt. Col. Nguyen Ngoc Loan, the South Vietnamese director of police, after a street battle during the Tet Offensive, which had begun two days […]
Continue Reading