This is the grave of the traitor J.E.B. Stuart. 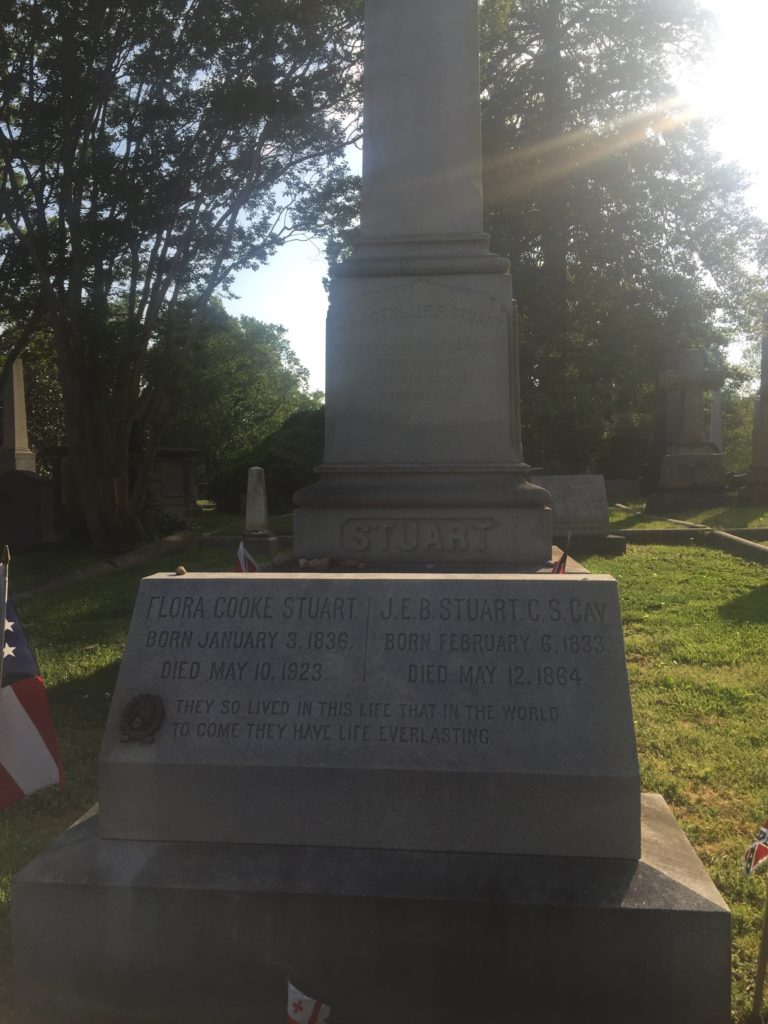 James Ewell Brown Stuart was born in 1833 on a plantation near the Virginia-North Carolina border. His family had long political and military connections within the Virginia elite. He wanted to be in the military very badly, as was so common among the southern elite. He tried to get a commission in 1848, but was only 15 years old and was rejected. So he attended Emory and Henry College for two years and then got accepted to West Point. Robert E. Lee became the superintendent at West Point in 1852 and his son also attended. So Stuart became close to that leading Virginia family and would later follow them into treason in defense of slavery.

After graduation, he was commissioned as a second lieutenant and sent west. He engaging in a number of our genocidal wars against Native Americans, was wounded in a battle against the Cheyenne in 1857, and patented an invention that improved how sabers were attached to belts, which the military bought off him. After John Brown’s raid on Harpers Ferry, Stuart volunteered to be Lee’s aide-de-camp to retake the arsenal. Stuart had run into Brown in Kansas, when he was in the military there. Stuart was a good officer and rising in the ranks. However, treason in defense of slavery beckoned. It wasn’t always an immediate decision for these southern officers. About 40% of them stuck with the United States. Lee himself equivocated a bit and went against the advice of his own family to commit treason. Stuart was still a member of the military on April 22, 1861, after Fort Sumter, when he received a promotion to captain. He didn’t resign until May 3, when he officially threw his hat in with treason in defense of slavery.

As I have stated before, the details of military campaigns put me to sleep, so I am going to sum this up quickly. Stuart remained a very good soldier and rose rapidly, partially based on his own competence and partially because he was close to Lee. He became a major general in July 1862 and was involved in a lot of the key campaigns that kept the Confederate traitors in the war for so long, such as circumnavigating McClellan’s ponderous forces. His troops performed well at Fredericksburg and Chancellorsville although far less well at Gettysburg. The southern press blamed Stuart and Longstreet and they were held up much later by the architects of Confederate memory such as the vile Jubal Early as the reason the South didn’t win the war. In any case, I simply find military maneuvers so utterly boring that I will leave it to you all to evaluate the case; I am simply reporting here.

In any case, Gettysburg’s failures stopped the rise of Stuart. But he was still an important general. In 1864, as Grant’s forces pushed toward Richmond with the endless slog required to win such a brutal war, Phil Sheridan decided to move massive forces against Stuart’s forces because he felt he could crush them entirely. George Meade didn’t like this idea, but Grant backed Sheridan because he knew Sheridan was a much better general than Meade. During this campaign, a 44 year old Union private named John Huff from Michigan recognized Stuart while his troops were retreating. Stuart was waving his troops forward. Huff saw him, stopped, and shot him with his pistol when he got close.

John Huff is thus one of the little known heroes of our nation. Stuart died the following day and the treasonous slavers had lost one of their best military leaders. Too bad it didn’t happen earlier. He may have “life everlasting” as it says on the tomb, but hopefully, it is in Hell. The worst part about atheism is knowing this isn’t true. His wife, who is also buried with him, wore mourning black the rest of her life and became a schoolteacher and then a principal at an elite women’s school. She died in 1923 in Richmond.

Of course, as the nation descended into a century of honoring racist treasonous slavers who lost the war, various institutions around the nation began naming things after Stuart. That has become controversial. A high school in Falls Church, Virginia has recently decided to rename Stuart High School as Justice High School after a petition started by the actress Julianne Moore and the TV producer Bruce Cohen, who both graduated from that high school.

The traitor Stuart is buried at Hollywood Cemetery, Richmond, Virginia.

This grave visit was supported by LGM reader contributions. I am incredibly appreciative of that. The best posts in this series are those of the worst Americans and since they tend to be far away from New England, I have to travel to visit them. So thanks to all who made this happen. If you would like this series to visit more traitors in defense of slavery, you can donate to cover the required expenses here. Previous posts in this series are archived here.