A few months ago, I was looking for a document in the rare book collection of the university’s main library, and I came across a copy of Der Giftpilz (“The Poisonous Mushroom”), the infamous anti-Semitic children’s book published by Julius Streicher in 1938.  I was required to wear white gloves when handling certain materials in the collection, and while delicately turning the fragile pages of this book — an original edition — I had the most extraordinary sensation, impossible to convey in words, of literally touching pure evil in literary form.

I don’t read German, and in any case the text was in some esoteric Gothic type that I could have barely made out in English or Spanish, which somehow added to the palpable horror of the thing.  The most horrifying detail — more so than the disgustingly crude illustrations — was that (I assume) the child who received this evil thing had doodled a few simple drawings of animals, trees, and the like on the inside of the front cover.

It’s of course an internet cliche that you can never ever analogize anything in this country to the Nazi horror, even as we slowly slide closer and closer towards open fascism and white supremacy. A friend writes: 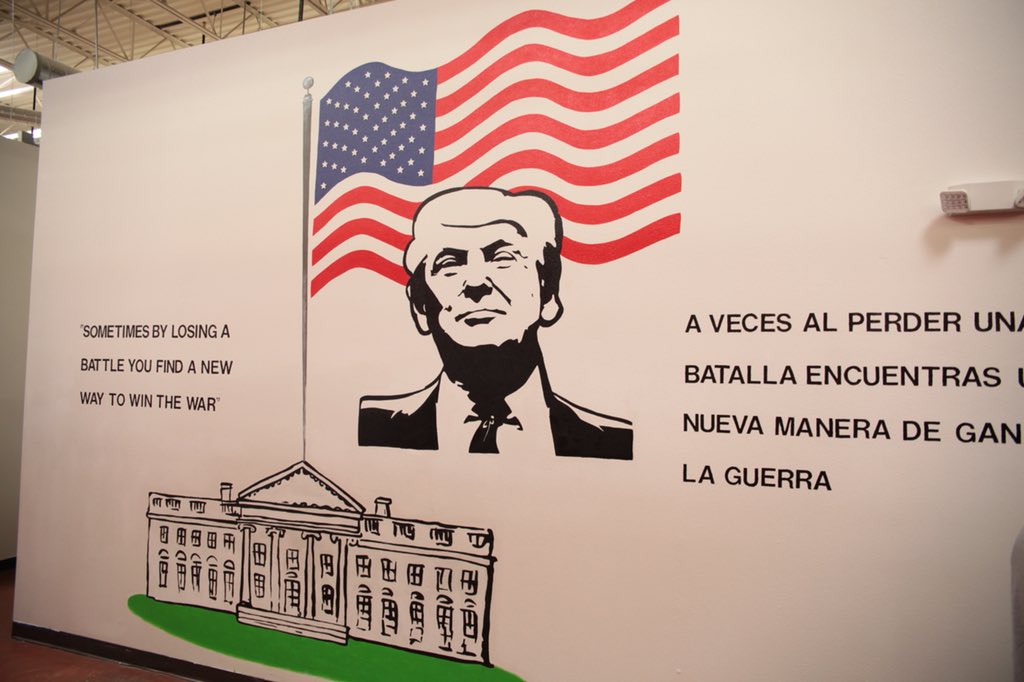 1. This is the poster the kids see in Trump’s kid jail. It’s a fine message to the little campers that things might seem a little rough right now, but good times are ahead. Oh, not for you. For MAGA. You can feel proud for doing your part, in some sense.

2. Now you might question the inclusion of Spanish here. This is America. We speak English. But the leader is merciful sometimes.

3. Jeff Sessions is enduring constant humiliation so that he can imprison these children. That is his highest calling. For the purposes of the Mueller investigation, we probably have to root for him to continue. His replacement as AG would probably be just as much of a children imprisoner, and would shut down Mueller besides. These are the sorts of trades we must make.

Complacency is our enemy. Anyone that does not embrace the @realDonaldTrump agenda of making America great again will be making a mistake.

As it gets worse, more attention needs to be paid to the role in all this played by our own Streichers — to the Limbaughs and Hannitys and Coulters and Jones’s and the other stars of our own very own Radio Rwanda.

Of all the men who were hanged at Nuremberg, the formal legal case against Julius Streicher was the most dubious.  Streicher was such overtly repellant and corrupt figure that he was stripped of all his political offices before the start of the war, and the case against him came down to the fact that his writings had played a key role in fomenting the culture-wide hatred and madness that culminated in the Holocaust.

Streicher’s hanging did not go smoothly.  After shrieking “Purimfest 1946!” at the witnesses, he spat out “the Bolsheviks will hang you all one day.”  When the trap door opened, something went wrong, and it was clear from the ensuing sounds that he was being slowly strangled to death, rather than expiring instantly from the severed spinal cord that is supposed to be the outcome of a proper long-drop hanging.