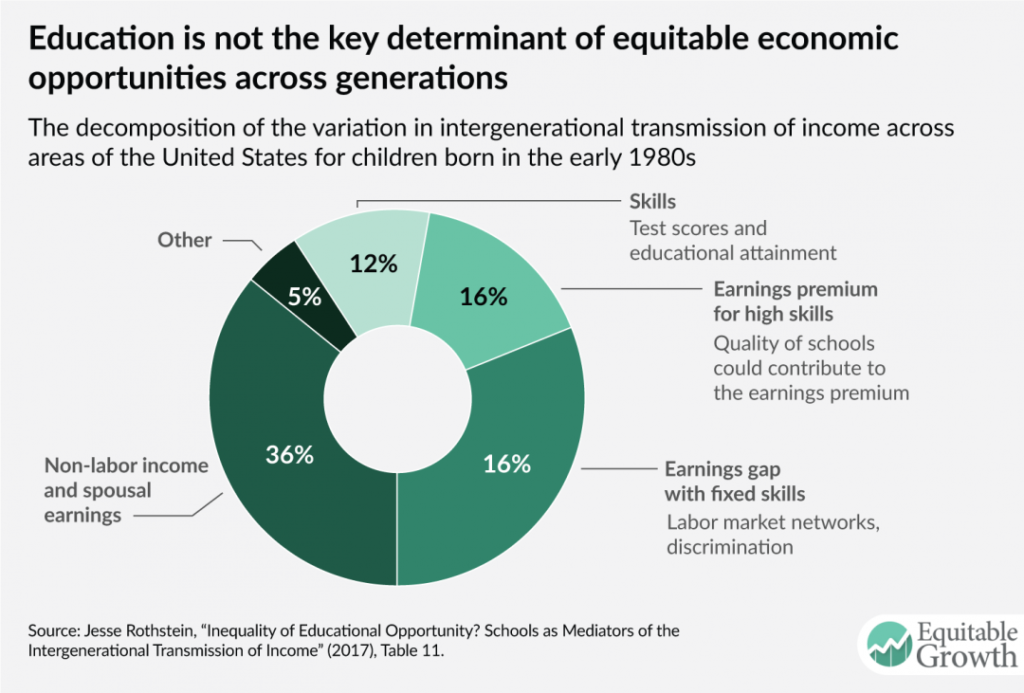 One of the mantras for educational policy is that better schools allow poor children to succeed. This is right at the core of the charter school ideology. And since those public schools fail to deliver on this promise, charters can instead through their DISRUPTION and of course busting teachers’ unions. The problem with all of this is that the problems poor children have in fighting for social mobility as they grow up is that they face all sorts of other problems that poverty creates, from bad family situations to malnutrition to poor housing. These are the problems with education in poor school districts. Until you solve poverty, you aren’t going to solve education. It doesn’t go the other way around. And, as Rachel Cohen shows in this piece, the evidence increasingly backs this up.

A new working paper authored by the UC Berkeley economist Jesse Rothstein builds on that research, in part by zeroing in on one of those five factors: schools. The idea that school quality would be an important element for intergenerational mobility—essentially a child’s likelihood that they will one day outearn their parents—seems intuitive: Leaders regularly stress that the best way to rise up the income ladder is to go to school, where one can learn the skills they need to succeed in a competitive, global economy. “In the 21st century, the best anti-poverty program around is a world-class education,” Barack Obama declared in his 2010 State of the Union address. Improving “skills and schools” is a benchmark of Republican House Speaker Paul Ryan’s poverty-fighting agenda.

Indeed, this bipartisan education-and-poverty consensus has guided research and political efforts for decades. Broadly speaking, the idea is that if more kids graduate from high school, and achieve higher scores on standardized tests, then more young people are likely to go to college, and, in turn, land jobs that can secure them spots in the middle class.

Rothstein’s new work complicates this narrative. Using data from several national surveys, Rothstein sought to scrutinize Chetty’s team’s work—looking to further test their hypothesis that the quality of a child’s education has a significant impact on her ability to advance out of the social class into which she was born.

Rothstein, however, found little evidence to support that premise. Instead, he found that differences in local labor markets—for example, how similar industries can vary across different communities—and marriage patterns, such as higher concentrations of single-parent households, seemed to make much more of a difference than school quality. He concludes that factors like higher minimum wages, the presence and strength of labor unions, and clear career pathways within local industries are likely to play more important roles in facilitating a poor child’s ability to rise up the economic ladder when they reach adulthood.

For Rothstein, there’s no reason to assume that improving schools will be necessary or sufficient for improving someone’s economic prospects. “We can’t educate people out of this problem,” he says.

His work, like Chetty’s, is not causal—meaning Rothstein is not able to identify exactly what explains the underlying variation in his economic model. Nevertheless, his work helps to provide researchers and policymakers with a new set of background facts to investigate, and signals that perhaps they should be reconsidering some of their existing ideas. (Both Raj Chetty and his co-author Nathaniel Hendren declined to comment for this story.)

Jose Vilson, a New York City math teacher, says educators have known for years that out-of-school factors like access to food and healthcare are usually bigger determinants for societal success than in-school factors. He adds that while he tries his best to adhere to his various professional duties and expectations, he also recognizes that “maybe not everyone agrees on what it means to be successful” in life.

Of course, there are many reasons to invest in good schools. The problem is when we assume our schools can solve poverty, which they can’t. If you want a well-educated workforce who are responsible citizens that understand governance and can build a strong America, you fight poverty. If you want to grift, you blame schools for not solving poverty and seek to privatize public resources.