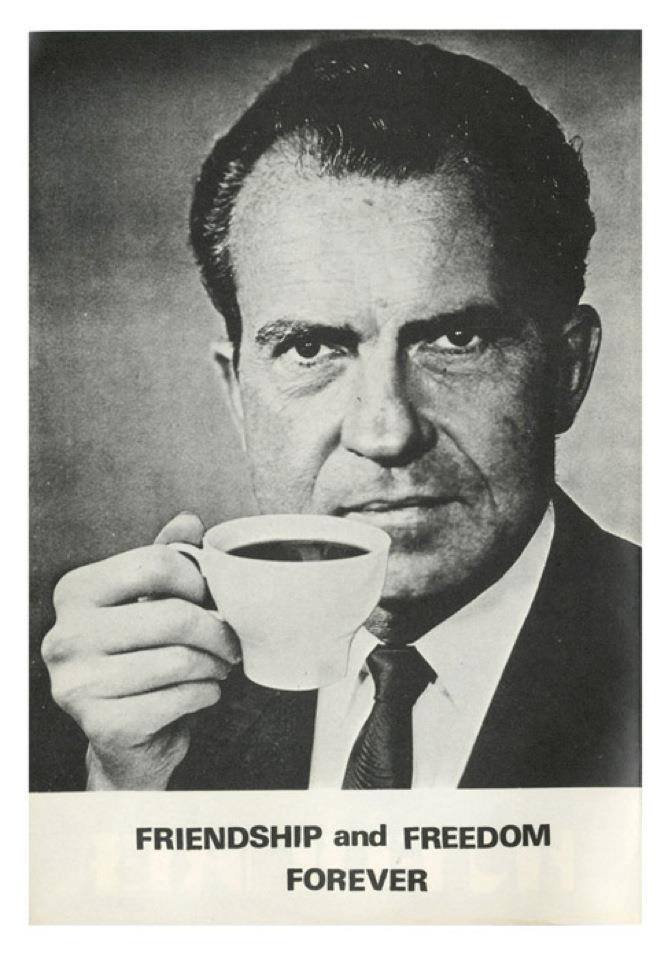 That Richard Nixon. What leadership he showed signing environmental legislation that passed the House 421-4 or whatever. That’s the sign of a true liberal. America’s great environmentalist president! And when he wasn’t doing that or finding other ways to advance liberalism like burglarizing the office of his opponent or rewarding the worst elements of the labor movement for beating up hippies by raising them to be Secretary of Labor or invading Cambodia or rooting on the crushing of the Attica strike, America’s Last Real Liberal Unlike That Neoliberal Sellout Barack Obama was vetoing universal child care legislation.

Back in 1971, though, the United States came as close as it has ever been — unbelievably close — to ensuring universal child care. And if you are a women who did not live through this era (or a woman who did not read Collins’ book and then lament its history lesson with all your girlfriends), you may not know that this ever happened. The sudden realization of which somehow makes the disappointment all the more biting.

That year, Congress passed a bill, the Comprehensive Child Development Act (which now merits all of three paragraphs in Wikipedia), that would have created a national network of federally funded child care centers, with tuition subsidized depending on a family’s income. It was budgeted at $2 billion for the first two years (the equivalent of about $10 billion today). That money was supposed to be a serious first step toward alleviating the challenges of a labor force increasingly full of working mothers. The government was to fund meals, medical checkups and staff training. No family would have been required to participate, but every one would have had the option.

“It was an entitlement,” Collins wrote in a New York Times column last year, “and, if it had become law, it would have been one entitlement for little children in a world where most of the money goes to the elderly.”

Congressional Republicans and Democrats alike supported the bill. The Senate passed it 63-17. Supporters expected President Richard Nixon to sign it. Then Nixon (with the urging of Pat Buchanan, then working in the White House) vetoed it with scathing language denouncing the “radical” idea that government should help rear children in the place of their parents. The veto rested on cultural grounds more than financial constraints. Here is the passage from Collins’ book that lingers:

The goal was not just to kill the bill but also to bury the idea of a national child-care entitlement forever. “I insisted we not just say we can’t afford it right now, in which case you get pilot programs or whatever,” Buchanan said. The veto message was actually a toned-down version of what Buchanan had suggested — he wanted to accuse the bill’s drafters of “the Sovietization of American children.” But it did the job Buchanan… had hoped it would do. It delivered the message that it was much more politically dangerous to work in favor of expanded child care than to oppose it.

There was little public attention surrounding the bill at the time Congress was debating it. After the veto, though, the very idea of government-funded child care spawned a fantastic misinformation campaign, complete with rumors that any such efforts would inevitably lead to government indoctrination of small children, and child labor unions empowered to fight their parents.

I was reminded of this earlier this week when I brought Caroline Fredrickson to campus and she talked about it, noting not only Pat Buchanan’s crazy words, but also those of Phyllis Schlafly, who also led the fight against universal child care.

This all makes me disgusted, not only because the Nixon’s actions have made the lives of millions of parents, especially single parents but almost all parents ultimately, far more difficult, but because it feels like universal child care is something completely off the progressive demand list today. And that’s ridiculous because it should be right at the top. I mean, let’s say Hillary wins and Dems even with the House along with the Senate. What are the priorities? Fixing the ACA, raising the minimum wage, an immigration bill, reinstating preclearance under the Voting Rights Act, campaign finance reform, etc., etc. And that’s all good. But my god, shouldn’t universal childcare be right at the top of that list? Maybe it’s because we don’t think it’s possible, maybe it’s because we have limited goals these days. But it’s not that long ago before it came within a smidgen of significantly moving forward.