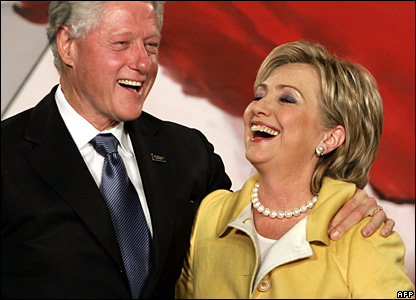 Over the years, Bill and Hillary Clinton have been subjected to accusations regarding so many fake “scandals” that it’s easy to dismiss further claims of impropriety and corruption as just more of the same. But as Jon Chait points out, it’s becoming evident that some of the things the Clintons have been doing over the past few years actually smell pretty bad:

The news today about the Clintons all fleshes out, in one way or another, their lack of interest in policing serious conflict-of-interest problems that arise in their overlapping roles:

The New York Times has a report about the State Department’s decision to approve the sale of Uranium mines to a Russian company that donated $2.35 million to the Clinton Global Initiative, and that a Russian investment bank promoting the deal paid Bill $500,000 for a speech in Moscow.

The Washington Post reports that Bill Clinton has received $26 million in speaking fees from entities that also donated to the Clinton Global Initiative.

The Washington Examiner reports, “Twenty-two of the 37 corporations nominated for a prestigious State Department award — and six of the eight ultimate winners — while Hillary Clinton was Secretary of State were also donors to the Clinton family foundation.”

And Reuters reports, “Hillary Clinton’s family’s charities are refiling at least five annual tax returns after a Reuters review found errors in how they reported donations from governments, and said they may audit other Clinton Foundation returns in case of other errors.”

The Clinton campaign is batting down the darkest and most conspiratorial interpretation of these stories, and where this all leads remains to be seen. But the most positive interpretation is not exactly good.

Chait notes the most positive interpretation is that, in the post-Clinton presidency years, and especially in the years when Hillary Clinton was Secretary of State, the Clintons were sloppy about details, greedy about money, and remarkably cavalier about potential conflicts of interest. And you don’t have to be the RNC’s media apparatus, i.e., FOX News et. al., to find more dire interpretations plausible.

For progressives, all this is, to put it mildly, depressing. Working to get someone with Hillary Clinton’s political views elected would require a certain amount of nose-holding even if she and her husband were above reproach, ethically speaking.

Under the circumstances, a race between Clinton and, say, Scott Walker is going to be akin to trying to acquire a sprained ankle instead of a major heart attack.