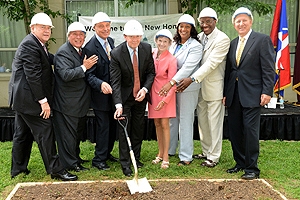 American is arguably the biggest ripoff going in legal academia, as it combines “prestige” of a sort (it is normally ranked among the top quarter of ABA law schools) with sky-high sticker attendance costs (estimated as $71,070 per year for 2013-14), very little in the way of tuition discounts (more than 60% of the class is currently paying sticker, and almost all the rest get a miserly $10,000 discount off that $70K bill), and wretched employment statistics, which have combined to produce a massively indebted and seriously depressed student body.

In these increasingly transparent times, the school tries to disguise these facts with a bunch of malarkey about how a law degree from American will allow prospective admits to “champion what matters”

The school markets itself as deeply committed to serving the public interest, which is an accurate characterization if serving the public interest is defined as transferring increasingly large sums of taxpayer money in the form of non-dischargeable educational loans into the bank accounts of law school administrators and faculty. Prospective AU law students are lured with visions of writing Brandeis briefs about polar bears for the DC office of the Environmental Defense Fund, without being warned that these days it’s actually easier to get a job at Wachtell than an even moderately sexy public interest position.

Moving right along . . . despite the seemingly endless supply of naive young people who can be snookered by this kind of thing, it’s heartening to note that the law school reform movement has helped crash AU’s applicant pool, which has shrunk from 9,000 three years ago to 5,800 this fall. Like other schools, American had and has three options for dealing with this unpleasant and potentially unprofitable development, which are to reduce the size of its class, the cost of attendance, or the selectivity of its admissions — or some combination of these strategies.

While the University of Iowa represents a school that appears to have gone all in with the first option, American has shoved in its chips with the third. This fall’s entering class of 474 1Ls is at just about the average size for AU entering classes over the last decade, and while real as opposed to nominal tuition data isn’t officially available yet, all indications are that the school didn’t up its very small “scholarship” budget.

What it did instead was continue to slash admissions standards. The median LSAT for the entering class has declined from the 86th to the 70th percentile in just two years, and, even more tellingly, since 2009 the 25th percentile for full-time matriculants has fallen a startling seven points — from 160 (the 80.4 percentile) to 153, which is barely above average for LSAT takers (55.6%). To get some sense of what the latter stat signifies, consider that a decade ago, only 55.6% of all law school applicants were getting into any law school, and that only about two-thirds of LSAT takers even bothered to apply to law school at all.

Amusingly, even as it trends toward an open door policy for modestly qualified applicants, American has become particularly aggressive about practicing what is known in the trade as “yield protection.” This is the practice of rejecting or more often wait listing highly qualified applicants, in order to game admission stats for the purpose of the ever-pernicious rankings. The way this works is that part of a school’s ranking is based on its “selectivity,” which is measured by what percentage of applicants it offers admission end up enrolling. What American did in this last cycle was to wait list or reject almost everybody who applied with a 166 LSAT or higher, which under the circumstances is sort of like sending Salma Hayek an email informing her that you won’t be asking her out tonight after all.