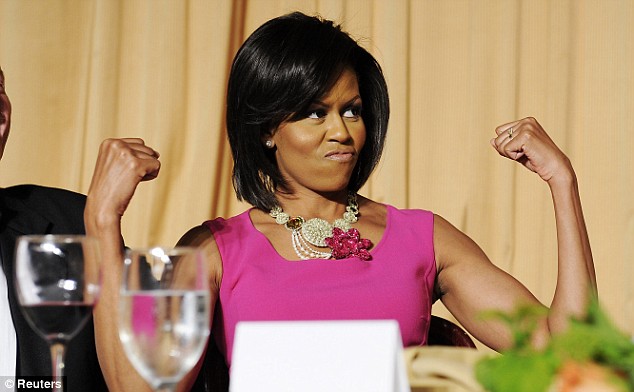 I have some thoughts at the Daily Beast about what Casey Heynes’ response to being informed that he’s fat might tell us about Michelle Obama’s Let’s Move campaign. Casey’s shift from dissent to resistance, as they used to say in the 1960s, is of course extremely upsetting to people like Michelle, who want to “help” him overcome his “problem.”

This brings to mind parallels with various other civil rights movements. There have always been plenty of white people eager to help black people overcome their “problems” in the same way Michelle wants to help fat kids. They point out that a brother just needs to look and talk like Sidney Poitier and most people will stop hassling you about the black thing (hey it sort of worked for her husband).

Similarly, lots of men have over the years pointed out that women wouldn’t have so many problems fitting in to [male-dominated] society if they just stopped being so emotional and shit. And of course there’s a cottage industry dedicated to getting rid of oppression against gay people by turning them into straight people.

Inexplicably, at some point people start getting mad about receiving this sort of help. And then the helpful people get mad and resentful and scared in return. After all they were only trying to help!

Update: Several people have mentioned in comments that they can’t see how a campaign whose explicit purpose is to “solve” the “childhood obesity epidemic” within a generation (i.e., a campaign whose goal is to make sure that a generation from now there’s no or as little as humanly possible “childhood obesity”) involves fat shaming. This is precisely equivalent to a first lady making an assault on the “childhood homosexuality epidemic” her main public policy issue, with the goal of eliminating childhood homosexuality in a generation, and then having a bunch of right-thinking conservatives argue that this has nothing to do with gay bashing. Since doubleplusgoodthinking liberals seem to have a whole lot of trouble grasping this analogy, I’ll spell it out a little further: “Homosexuality = “Obesity.” “Gay” = “Fat.”

De-lurking for a moment: one of the main moments in the gay liberation movement was to challenge the binary of homosexual vs. heterosexual and to replace it with the binary of gay vs. straight. They did so because the homo-hetero binary medicalized the issue (they argued that the labels turned the issue into the normal vs. the deviant), and instead they preferred the gay/straight designation because it was more egalitarian and highlighted the political dimensions of the conflict (being gay is not a medical designation but a politicized identity). In any case, Campos’ main goal is to do the same thing with “fat”–to transform the discussions about obesity from a medical/health discourse into a political one. This is not to endorse Campos’ position here or his rhetoric/argumentation style (in my view, he tends to obscure the crucial issues). Rather, I’m just trying to situate what is at issue here.

Let me also add, if somewhat hopelessly, that the question of whether being “fat” can be considered a political identity is not solvable by appeals to facts alone. When a new political identity is declared or appears on the scene, it always looks absurd (or even insulting, as that appearance often is done by way of comparison to earlier emergences–such that fat activism becomes a piece of earlier liberation movements, which some find to be a wrong and insulting demeaning of those movements; but it’s worth noting that the same attitudes emerged when, for instance, when feminists or gays raised their claims). Thus, the determination of whether one should accept or deny Campos’ claims should not be made by trying to figure out whether “fat activism” is “really” like gay activism or not; in the existing order of things, the claim is false, but the whole purpose of the claim is not to describe the truth of things but to bring into being a new organization of the world in which fat people are treated differently. So in my opinion, the question of whether to support Campos’ activism turns on the question of whether the world that this activism is trying to create is something we would want to endorse or not.