The final assignment of my visual rhetoric course is called Rhetoric in Practice (or RIP). It has two components. To paraphrase the rubric: the students create their own rhetorical performance, explore questions of how to target an audience, follow the conventions of a genre, choose the medium for their message, and all the while, use the critical tools they’ve been learning all quarter to develop their ideas. They then perform a rhetorical analysis of their own work via a detailed writer’s memo.

The pedagogical theory behind this is sound: by forcing them to do something fun at the end of the quarter, the tools I taught them over the course of it become more solidly ensconced in their brain-space. Only this time, instead of deducing the rhetorical intent behind someone else’s decisions, they must decide how to communicate their message to their target audience most effectively. Over the years I’ve had many successful projects, including

This quarter it looks like I’ll be adding a few more to my personal hall of fame. One of them is so conceptually brilliant in its timeliness that the idea alone sent my head spinning: a comic in which a super-heroic University of California student punches a certain unpopular university president in the face repeatedly (this idea elicited cheers from classmates when the student first shared it). The second is a web-comic by this student entitled “Batman Is My Boss.” Here’s a sample page in which she uses moment-to-moment transitions to great effect: 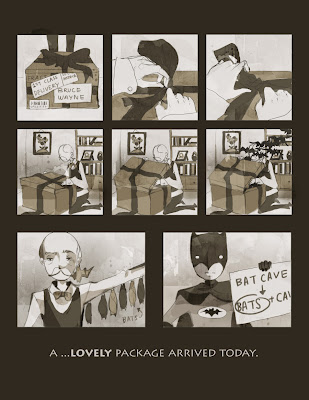 She plans on updating it both for the class and, with encouragement, after it ends. Go encourage her already!