Reading over the latest effluvium of John Ziegler, I noticed something odd: 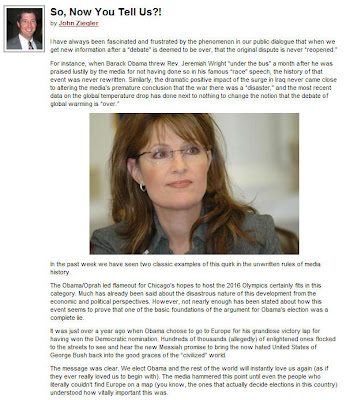 It’s not the fact that there’s a picture of Sarah Palin there—this is John Ziegler after all—it’s that the picture of Sarah Palin has been inserted into a post that has nothing to do with Sarah Palin. Ziegler runs through the tired talking conservative points: Obama, Reverend Wright, the Surge, Oprah, the Olympics, Copenhagen, Tiger Woods, Henry Gates, Chicago, and David Letterman . . . which reminds him of the time he defended the honor of Palin family by protesting outside a CBS studio.

Think about it: Ziegler writes a post that offers a host of photogenic options, but because he mentioned Palin, her image graces it. Of course, he did write, direct and produce a hagiographic treatment of the former governor, meaning he has hundreds, if not thousands of hours of footage that we’re all better off not thinking about what he must do when he watches it.

*As opposed to “Laying Bear,” the secret Eskimo name Ziegler calls her when he and didn’t I just say we’re all better off not thinking about what he must do when he watches that footage?