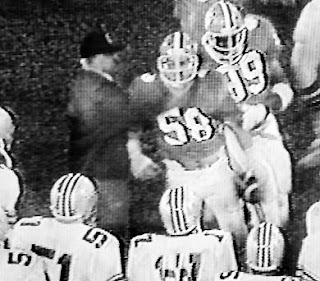 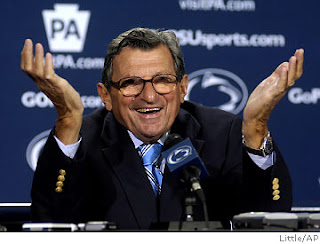 Penn State University’s titular head football coach, Joe Paterno, is old. Really, really old. How old? Well Chalmers (“Bump”) Elliott was Michigan’s football coach for ten years, before retiring from the profession 41 years ago this fall. He then went on to be Iowa’s athletic director for 20 years, before retiring from that position 19 years ago. Elliott is a year older than Paterno.

Anyway, PSU under Paterno was for decades a remarkably consistent program. They finished fifth in the nation in overall winning percentage (out of 121 D-I programs) in the 1970s, seventh in the 1980s, and sixth in the 1990s. Then age suddenly seemed to ambush Paterno, and the team more or less collapsed. In the first five years of this decade PSU fell to 72nd in overall winning percentage. Paterno’s behavior on the sidelines and at press conferences started going from charmingly eccentric elder statesman to disturbingly crazy old coot.

After racking up a several-year won-loss record that would have gotten any other coach at a historically elite program fired, Paterno hung on, cashing in a mountain of institutional chips, and leaving observers to wonder how long it would be before his career ended in some Woody Hayes-like incident (Hayes, the legendary Ohio State coach, was fired in 1978 after punching an opposing player on the sidelines at the end of a game).

Then something unexpected happened. Penn State got things turned around. In the four and a third seasons since 2005, PSU is more or less back to where they were before the decline and fall of the Paterno empire. Their 43-11 record is 8th best in Division I over that span. What happened?

Apparently, Penn State’s assistant coaches somehow managed to wrest all actual decision making power from their putative boss. Long time defensive coordinator and heir apparent Tom Bradley is now all but openly acknowledged by everyone but JoePa himself to be PSU’s real head coach. Now during games Paterno sits in a booth high above Beaver Stadium, a quite possibly unplugged headset straddling his still remarkably dark hair, a video monitor before him, which for all anyone knows may be playing highlights of the 1983 Sugar Bowl in a continuous loop.

Perhaps some sociologist or political scientist with an interest in institutional theory (and college football) will one day study this bloodless coup with the analytic rigor it deserves.

Update: I thought it was fairly obvious this post was somewhat tongue in cheek (I don’t actually believe JoePa was watching the 1983 Sugar Bowl on his monitor during games). Still it would be interesting to try to figure out the processes by which guys like Paterno and Bowden cede much or all of their previous decision making authority, while still holding on to their jobs. (It’s clear both of them have, although the extent of their semi-retirements isn’t.)